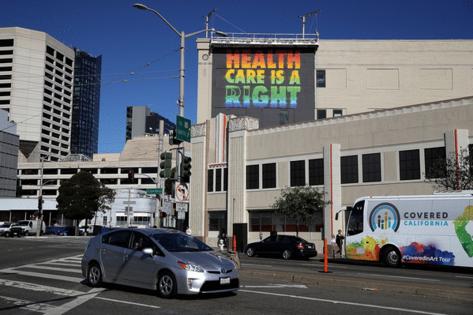 Federal subsidies passed as part of a temporary pandemic relief package have drastically cut how much he pays in health care premiums, allowing the Sacramento-area small-business owner to purchase an insurance plan during the last two years that provided better coverage for his shoulder and knee replacements.

Those federal subsidies, however, will expire at the end of this year if Congress does not extend the program. His “very manageable” price — about $700 a month for him and his wife — will increase to $2,300, Winlock said.

Roughly 150,000 lower- and middle-income Californians would be similarly priced out of coverage by the rising premiums if the federal subsidies are not extended, a Covered California analysis recently estimated.

The federal subsidies were passed in early 2021 as part of the Biden administration’s American Rescue Plan Act, which temporarily provided help to Americans to recover from the economic and health effects of the COVID-19 pandemic.

Under the act, health insurance premiums were capped at 8.5% of a household’s income. That significantly dropped monthly payments and led to more consumers signing up through Covered California, the insurance marketplace created by the 2010 Affordable Care Act for working-age people who aren’t covered by a health plan at their job.

Enrollment in the state’s exchange has hit a record-high 1.8 million, of which Covered California reported that 92% received some form of subsidy.

“These enhanced subsidies have fundamentally delivered affordability and delivered on the promise of the Affordable Care Act in the way that it was intended,” said Jessica Altman, executive director of Covered California.

“There were a lot of people who said things like, ‘Oh, my gosh, you know, for the first time I can afford my health insurance and my child care....’ This is particularly important given the inflationary environment we are in now.”

Food safety is important for everybody, but it is especially important if you're expecting. Hormonal changes during pregnancy can change a pregnant person's immune system, making her more susceptible to contracting ...Read More

DEAR MAYO CLINIC: I recently realized that I often ask people to repeat themselves, and I must turn up the volume on the TV louder than before. How do I know if I have hearing loss? I am 46. Aren't I too young for hearing ...Read More

Q: How can I help my daughter, who has autism, prepare for a telehealth appointment?

A: Telehealth visits can be a helpful part of your child's ongoing medical care. Because regular visits and therapy may require time ...Read More

MANKATO, Minn. — Are we out of the woods with COVID-19? Have we reached the endemic stage? Should we adopt the mindset that the virus is just a part of our lives now and carry on as usual?

Many people are walking around...Read More

When Cynthia Johnson learned she would owe $200 out-of-pocket for a diagnostic mammogram in Houston, she almost put off getting the test that told her she had breast cancer.

DEAR MAYO CLINIC: A close friend was diagnosed recently with Lyme disease due to a tick bite. However, I recently read about some new type of tick-borne illness. My family loves to hike and be outdoors, but I'm nervous now...Read More