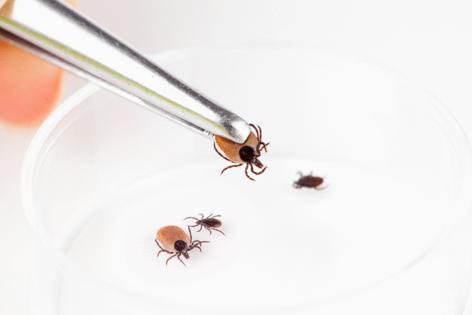 DEAR MAYO CLINIC: A close friend was diagnosed recently with Lyme disease due to a tick bite. However, I recently read about some new type of tick-borne illness. My family loves to hike and be outdoors, but I'm nervous now about continuing our activities. How can I reduce our risk of illness from insect bites and protect my family?

ANSWER: Enjoying the outdoors is a wonderful way to spend quality family time together, but there are certainly some risks, especially from ticks. The tiny bugs, which are closely related to spiders, are nearly everywhere in the U.S. and can transmit several different germs to humans. Two new tick-borne pathogens were detected at Mayo Clinic in the past decade.

The most prevalent and commonly known tick-borne disease in North America is Lyme disease. It's caused by the bacteria Borrelia burgdorferi and Borrelia mayonii and is transmitted by a black-legged tick, also known as a deer tick.

Recently, there has been concern about the Lone Star tick, which carries the Heartland virus, and can cause illness or even death. These ticks have been around a long time, but the numbers are increasing from the southeastern U.S. to other parts of the country. It is important to be educated about ticks and take measures to protect yourself and your family from tick-borne diseases.

To reduce the risk of tick bites, remember these ABCs:

• Avoid ticks: Be aware of the places that are more likely to have ticks and try to avoid them. A forest — with a lot of areas of undergrowth, leaf litter and tall grasses — is a prime place to encounter ticks. If you are going for a hike, look for a clear path and stay in the middle to decrease the chance of encountering ticks.

• Bug spray: Whenever you go outdoors, whether it's spring, summer or early fall, apply bug spray. The Centers for Disease Control and Prevention (CDC) recommends applying a bug spray to your skin that contains either DEET 30% or Picaridin. You also could use a bug spray on your skin that has oil of lemon eucalyptus in it. There is also a tick repellent called permethrin that can be sprayed on clothing for an extra layer of protection. Permethrin actually kills ticks, and it will last through several washes. The Environmental Protection Agency has rated all the different types of tick and mosquito repellents, and has shown these ingredients to be very effective in repelling and even killing certain types of insects and ticks.

• Clothing: If you're going to be outside and in areas where ticks may be lurking, dress in a way that limits skin exposure and will make it harder for ticks to bite. Something as simple as tucking your pants into your socks can help in this regard. When it is hot outside, it may not be comfortable to wear long pants and long-sleeved shirts, so that's where the combination of clothing and bug spray come together.

In addition to preventive measures, it's very important to check yourself for ticks after coming in from outdoors. That also holds true for other members of your family, your friends and your pets. You should check yourself as soon as you come inside and periodically during the day if you're going to be outdoors for some time. The longer a tick stays attached to your skin while it's feeding, the greater likelihood there is for transmitting some type of harmful pathogen.

To remove a tick, use forceps or fine-tipped tweezers to pinch the tick at the point where its mouthparts are inserted into the skin. Pull the tick out slowly in one continuous motion. You want to avoid twisting or crushing the tick during this process, since that may increase the risk of getting an infection from the tick. Also avoid home remedies for removing ticks, such as putting nail polish or petroleum jelly on the tick or lighting it on fire.

If you have been exposed to ticks, particularly if you have a known tick bite, closely monitor for symptoms of a tick-borne disease, such as rash, flu-like symptoms, fever, fatigue, muscle aches and joint pains. In rare cases, some patients can develop a significant allergy to meat, such as pork, beef or venison, after a tick bite.

A patient that discovers a tick that has been attached for 36 hours or more, or who has any of the symptoms listed above, should see a primary health care professional. Thankfully, there are several tests and new testing algorithms that are available at Mayo Clinic to check for both early- and late-stage disease for all the tick-borne diseases in the U.S.

As ticks continue to expand their ranges and move into other parts of the country, it's even more important to take efforts to reduce your risk of tick-borne diseases. — Dr. Bobbi Pritt , Clinical Parasitology Laboratory, Mayo Clinic, Rochester, Minnesota

“I’m somebody who ...Read More