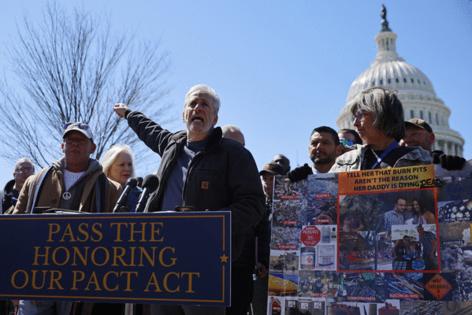 WASHINGTON — Brielle Robinson couldn’t get her dad back on her 9th birthday Thursday, but she did get a flag flown over the U.S. Capitol in honor of Sgt. Heath Robinson, her grandmother said, and a bill passed in his name to help thousands of other veterans sickened and dying from toxic burn pits.

Robinson, a former medic, got a rare form of lung cancer in 2017 after serving in Iraq, on the same base as President Joe Biden’s son, Beau, 10 years earlier.

Robinson died in 2020, fighting not just against his illnesses, but against military bureaucracy and for legislation that would spare other military families in even worse straits than his.

“He fought valiantly for three years to survive as long as he could for his daughter,” his mother-in-law, Susan Zeier, told reporters as the Senate passed the Sgt. 1st Class Heath Robinson Honoring Our PACT Act.

She made a particular point of wearing one of Robinson’s Army jackets — something she’s done since 2018 to lobby Congress, inspired by 9/11 first responders who wore their gear to Capitol Hill getting Congress to help them.

“Today with this bill passing the Senate, I think it’s time to retire it,” Zeier said. “I no longer have to carry Heath on my shoulders, while I’m advocating for all the other veterans out there who are sick and dying.”

According to the VA, some 3.5 million American warfighters were exposed to air from poisonous burn pits in deployments overseas since the nation went to war in the wake of the 2001 terror attacks.

Growing numbers have gotten sick or died from that exposure, having breathed in smoke all-too-similar to the toxic clouds surrounding the destroyed World Trade Center.

The smoke came from massive open-air pits that the military used to incinerate plastics, medical waste, ammunition and anything else, even setting it aflame with jet fuel, much like the accelerant that burned the twin towers.

But around three-quarters of ill service members and veterans who submitted claims were denied by the VA because toxic exposures were not covered.

Fans of JBiebz — and practically everyone plugged into pop culture — are buzzing over Justin Bieber’s Instagram disclosure that he is experiencing facial paralysis after a viral infection led to a condition called ...Read More