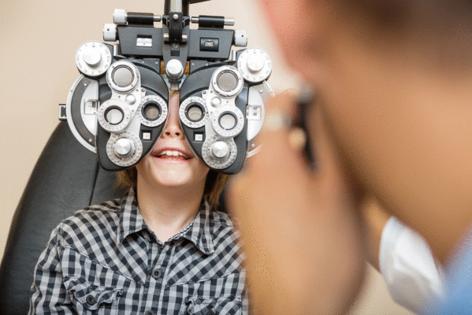 It wasn’t until last fall when her eighth grade class in Bloomington, Indiana, got vision screenings that Jessica’s extreme nearsightedness and amblyopia, or lazy eye, were discovered.

She’s been going through intense treatment since then, and her optometrist, Dr. Katie Connolly, said Jessica has made great improvements — but her lazy eye, which causes depth perception problems, may never go away. The chances of it being completely corrected would have been much higher if her condition had been caught earlier, said Connolly, chief of pediatric and binocular vision services at Indiana University’s School of Optometry.

Jessica is one of the countless students falling through the cracks of the nation’s fractured efforts to catch and treat vision problems among children.

The Centers for Disease Control and Prevention estimates that more than 600,000 children and teens are blind or have a vision disorder. A recent opinion article published on JAMA Network notes that a large number of these children could be helped simply with glasses, but because of high costs and lack of insurance coverage, many are not getting that help.

Yet the National Survey of Children’s Health, funded by the federal Health Resources and Services Administration, found that in 2016-17 a quarter of children were not regularly screened for vision problems.

And a large majority of those vision impairments could be treated or cured if caught early, Connolly said.

“Screenings are important for kids because kids don’t realize what’s abnormal,” said Connolly. “They don’t know what their peers around them — or even their parents — are seeing to realize their experience is different.”

Eye exams for children are required under federal law to be covered by most private health plans and Medicaid. Vision screenings are mandated for school-age children in 40 states and the District of Columbia, and 26 states require them for preschoolers, according to the National Center for Children’s Vision and Eye Health at the nonprofit advocacy organization Prevent Blindness.

Still, many children who are struggling to see clearly are being overlooked. The pandemic has only exacerbated the issue since classes moved online, and for many students in-school vision screenings are the only time they get their eyes checked. Even when campuses reopened, school nurses were so swamped with covid testing that general screenings had to be put to the side, said Kate King, president-elect of the National Association of School Nurses.

DEAR MAYO CLINIC: Cases of COVID-19 are once again surging in parts of the U.S., and I'm hearing about different strains, such as the BA.5 and BA2.75 omicron subvariants. What do I need to do to keep my family safe, ...Read More

PHILADELPHIA -- What makes a good relationship between a patient and a mental health provider? It starts with a good match.

Great summer days are full of relaxation, fun and plenty of sunshine. Unfortunately, spending too much time in the sun can lead to a sunburn. Your skin may be inflamed, painful and feel hot to the touch.