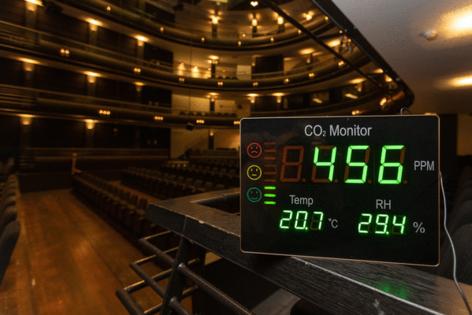 We had just spent a weekend at New Orleans’ annual jazz festival, where we spent long days baking in 90 degree weather and drinking plenty of beer to stay cool. But hangovers and heatstroke weren’t the only potential culprits.

The risk of COVID was everywhere. I knew that because for weeks I had been carrying around a palm-sized, $150 carbon dioxide monitor that assesses exactly that.

Then Jesse told me that he couldn’t smell anything. A bright pink line soon confirmed the answer I’d been dreading. He had COVID. Three days later — after two years of avoiding it — I tested positive, too.

Carbon dioxide monitors can assess how COVID-risky a space is because they help tell you whether you’re breathing in clean air. They measure the concentration of carbon dioxide, which people exhale when they breathe, along with other things like, potentially, virus particles. The more well-ventilated a space, the lower the reading on my monitor's screen — meaning not only less carbon dioxide but also less of the stuff like COVID that might make people sick.

I had been testing out the device because I was curious how helpful technology like this might be in the midst of a global pandemic as we all make decisions about which aspects of pre-pandemic life to resume and where to still practice caution. I also wanted to see what it might reveal about the safety of the places I spend my time. More often than not, I found that the number on the screen of my monitor was high — too high.

I’m not the only one who’s had this idea.

“Because masks are not required anymore, I find myself using a carbon dioxide sensor more,” said Linsey Marr, an aerosol scientist at Virginia Tech who has had a monitor for about a year and a half. “I feel like I now have a much better sense of, ‘Oh this place could be risky, and this less risky.’”

In a perfect world, carbon dioxide levels would be readily available in every space — allowing us insight into the invisible infrastructure that determines the safety of our environment as we go about the awkward business of finding a new normal. Instead, we’re stuck navigating this new phase of the pandemic without any real idea of how risky our offices, favorite restaurants or local cinemas really are.

The CO2 monitor came with me not just to New Orleans (where the carbon dioxide readings ranged from 636 parts per million to 4325 ppm) but also to a family Passover seder in Illinois (under 1,000 ppm), wine tastings in Oregon’s Willamette Valley (441 ppm to 722 ppm) and, after the transportation mask mandate ended in mid-April, on plane rides filled with newly maskless travelers (around 585 ppm to 1,928 ppm).

The monitor frequently showed a number that was higher than the Centers for Disease Control and Prevention’s recommended benchmark for indoor air quality of 800 ppm – in fact, about 60% of my readings over the course of a month exceeded that number.

At restaurants, in taxicabs and on airplanes I watched the digits climb to worrisome levels, but also at people’s houses, in a hotel room and at a store. Sometimes, the readings were several times higher than 800 ppm.

Those numbers were a signal not only that I was in poorly-ventilated spaces, but also that I was breathing in the potentially COVID-laden air that other people were exhaling. At one point, while in a car with the windows closed and AC on, nearly 10% of what I was breathing in had been exhaled. My carbon dioxide monitor actually tells me exactly how much that is happening.

If you’re in a space with high carbon dioxide levels, says Marr, you may want to put on a high-quality mask or try and minimize time in that place.

Some of the highest readings on my travels were taken as the flights I was on were boarding. While you hear a lot about airplane filtration, those systems often aren’t running until the airplane starts moving.

“We’ve been warning about this,” said Joe Allen, an associate professor at the Harvard T.H. Chan School of Public Health and another carbon dioxide monitor-carrying public health expert.

The carbon dioxide monitor’s readings were also high in flight, but that turned out to reflect one of the device’s limitations: It measures ventilation, but not filtration. On airplanes, air is recirculated, so you are breathing in a lot of air that other people have breathed out, but that air is also going through a high-quality filter, so it is unlikely to contain virus particles, said Marr.

Limitations aside, my device’s readings were consistently high in many kinds of places. Allen said this is because good ventilation just isn’t generally a high priority — though he sees that changing now, two years into a global pandemic that has killed more than 1 million Americans. Improving indoor ventilation doesn't have to be difficult or expensive, either. It can be as simple as opening windows or installing high-quality filters in an existing HVAC system.

And fresh air doesn’t just reduce COVID risk. It can also help reduce the contaminants that build up from such things as pet allergens, mold and chemical cleaning products — all stuff you don’t exactly want to breathe in either. There’s even a name for illness caused by poor ventilation: sick building syndrome.

Places that I didn’t manage to get to during my travels, like Boston’s public schools (where Allen has served as a ventilation advisor) and entertainment venues in Japan, are making information about air quality more widely available. Belgium has gone even further, requiring visible carbon dioxide monitors in public settings.

Meanwhile in the U.S., the Biden administration has only said that businesses and organizations should take steps to improve indoor air quality. But those are just recommendations, and the administration hasn't laid out specific standards for air quality nor provided dedicated funding to assist with broad improvements.

Still, the new emphasis on indoor air quality may help grow the global market for technology that can monitor indoor and outdoor contaminants. That market is expected to grow from $4.4 to $6.4 billion by 2028, according to the New York-based Zion Market Research.

Ventilation is not the only factor that influences risk, but it is one of the easier factors to change. It’s also less severe than other COVID measures like, say, restricting indoor capacity. (Allen said that vaccination status, the amount of time spent in a place and the size of a space are also important.)

And sharing that information with the public can allow us to better understand the risks we are taking as we go about life in a world where an extremely contagious virus is all around us.

The monitor also showed me what places were fairly safe. Like outdoors, where levels stayed low even at crowded Jazz Fest. Airports were surprisingly well-ventilated, and so was a hotel lobby, especially relative to the hotel room upstairs. The high-ceilinged, mostly empty wineries in Oregon where my friend and I did tastings had great readings, too.

No one can know for sure exactly how they got COVID, but after a month of monitoring carbon dioxide levels, I had a pretty good idea. Most of Jazzfest happens outside, but on our first night in New Orleans we had tickets for a performance by my boyfriend’s favorite band.

We got to the show early, and stopped at the bar. The space was still relatively empty. I pulled out my carbon dioxide monitor and checked the reading: 641 ppm. Not bad. Well below the CDC’s benchmark of 800 ppm.

Soon the venue filled up with people singing and dancing. My monitor died, but based on all the readings I’d done so far, I could easily envision those numbers ticking up well above 800.

Not long after, one of the musicians who performed that night shared publicly that he had COVID-19. And days later, we had it, too.

DEAR MAYO CLINIC: Cases of COVID-19 are once again surging in parts of the U.S., and I'm hearing about different strains, such as the BA.5 and BA2.75 omicron subvariants. What do I need to do to keep my family safe, ...Read More

PHILADELPHIA -- What makes a good relationship between a patient and a mental health provider? It starts with a good match.

Great summer days are full of relaxation, fun and plenty of sunshine. Unfortunately, spending too much time in the sun can lead to a sunburn. Your skin may be inflamed, painful and feel hot to the touch.