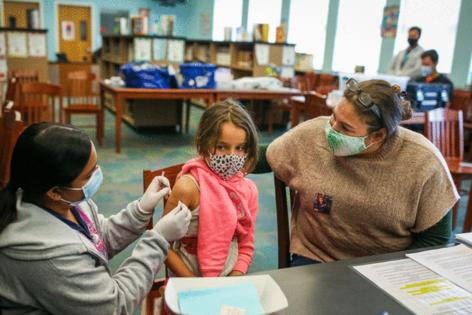 SAN JOSE, Calif. -- With COVID-19 cases rising again in the Bay Area, parents have a new consideration for protecting their children this week: The Food and Drug Administration granted emergency use authorization Tuesday for kids ages 5-11 to get a booster shot of Pfizer’s COVID-19 vaccine.

So should they? Tuesday’s announcement didn’t include much guidance for parents, who may have a mountain of questions about what to do next. Here’s a few questions and answers about the latest on boosters and vaccines for kids:

Q Are the boosters available for kids now?

A The FDA’s authorization allows medical staff to give kids their third shots. But that doesn’t necessarily mean you can get one today. County health departments, health care providers, including Kaiser Permanente and Sutter Health, and major pharmacies such as CVS say they are awaiting further guidance from the Centers for Disease Control and Prevention, whose vaccine experts are scheduled to meet Thursday.

Q When will kids be able to get boosted?

A The FDA says boosters should be given “at least five months after completion of a primary series” with Pfizer’s COVID-19 vaccine, which was initially authorized for kids 5-11 in October. So far only 29% of kids that age are fully vaccinated.

Q Are kids this age really at risk from the virus?

A COVID-19 has consistently been deadlier to older people, but children ages 5-11 have died from the disease — a total of 364, according to the CDC. How does that compare to other diseases? During the worst recent influenza season in 2009-2010, 358 pediatric flu-related deaths were reported to the CDC. There were 199 flu-related child deaths reported in 2019-2020, but statistical modeling suggests there may have been up to 434.

Q Why are they authorizing boosters for kids 5-11 now?

A Dr. Peter Marks, who heads the FDA’s Center for Biologics Evaluation and Research, said that “emerging data suggest that vaccine effectiveness against COVID-19 wanes after the second dose of the vaccine in all authorized populations.” He added that the agency has determined “the known and potential benefits” of a booster shot outweigh “its known and potential risks.”

The FDA’s move comes as cases continue to rise across the country, and the Bay Area has become a national hotspot, prompting Bay Area health officers to recommend everyone wear masks indoors again. Since March the Bay Area has seen its case rate increase five-fold, while California’s has quadrupled.

Q Is the booster the same as the shots my kids had months ago?

A Yes, the booster is a third shot of the same Pfizer vaccine authorized for kids 5-11 last fall, which was given in two 10-microgram doses three weeks apart.

Q Have boosters been OK’d for older kids?

A Yes, the FDA authorized a single 30-microgram dose of Pfizer’s vaccine for those 12 and older on Jan. 3.

Q What about kids under 5 who have no vaccine? When’s that coming?

A That’s still unclear. In December, Pfizer announced that studies of a two-shot, lower-dose vaccine in development for kids who are from 6 months to 4 years old found insufficient immune response among older children in that group. It said it was evaluating a three-dose regimen, and the company said Tuesday that trial “is ongoing” and “initial data is expected in the coming weeks.” Moderna also has asked for authorization of its shots in kids 6 months to 6 years. The FDA’s vaccine experts will consider vaccines in younger populations next month.

Q Does any data show how effective this booster is for kids?

A Pfizer said it provided data that showed children 5-11 “had a robust immune response with a favorable safety profile” to the third shot given at a time when omicron was the prevailing variant. The FDA said antibody responses, which help the body ward off infection, were evaluated in 67 study participants who received a booster dose 7 to 9 months after their initial shots, and that antibody levels rose a month after the booster.

Q What does that mean for real-world protection against infection and severe disease?

A Dr. Paul A. Offit, an attending physician at Children’s Hospital of Philadelphia, said Tuesday that antibodies always wane after vaccination or infection, but that the body still maintains the ability to fight off severe illness.

“With that third dose, you’re buying better protection against mild illness for the next 3 to 6 months,” Offit said.

Dr. Monica Gandhi, an infectious disease specialist at UC-San Francisco, said antibodies are expected to increase after a booster dose but that does not necessarily translate to clinical benefit, and the Pfizer trial didn’t evaluate whether the booster shot prevented symptomatic COVID or severe disease.

Q Should we delay a kid booster until the holiday season when we’ll want it the most?

A Offit said you could argue that it would make more sense to wait since the bulk of the protection against infection will be gone by then.

Q OK, but is there any harm in getting the booster?

A Offit said the rare heart inflammation side effect seen mostly in teen boys and young men after getting the shots hasn’t shown up as a safety concern in the younger kids receiving the lower-dose vaccine. “Will it be seen after third dose? Possibly. Time will tell.”

Gandhi said given that young males are more at risk of the heart inflammation side effect, “the risk versus benefits of giving a third shot to 5-11-year-olds is not clear from the data presented today.”

Q I heard most kids already have been infected, so do they need a booster?

A Some experts say probably not. A recent CDC study indicated three out of four U.S. kids have been infected with the virus. Gandhi argued a child who recovered from recent infection and had a single vaccine dose would have what is known as “hybrid immunity,” which she said is “likely the most effective strategy to gain long-term protection.”