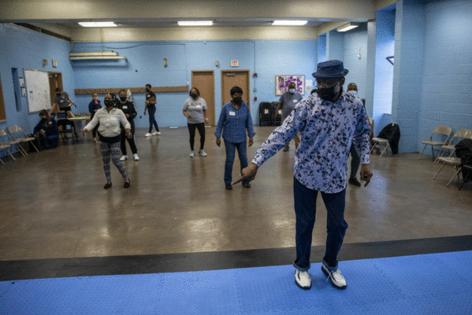 PHILADELPHIA -- You know that woman in your office who says she runs five miles every morning and lifts weights three times a week?

In reality, Philadelphians don’t exercise a whole lot compared with folks in other large U.S. cities, according to an analysis of 2021 data from the Centers for Disease Control and Prevention released earlier this month by ChamberOfCommerce.org. The organization writes reviews on marketing and financing for small businesses and isn’t affiliated with the U.S. Chamber of Commerce.

Researchers calculated the share of adults who self-reported to the CDC how often they participate in leisure-time physical activity such as running, calisthenics, golf, gardening, or walking for exercise. Such exertions help forestall obesity, diabetes, and depression.

At No. 1, Seattle residents — despite clouds and rain — exercise the most at a rate of 84.7%. The people of Cleveland , are last at an exercise rate of 61.7%. The list goes only to 49 because those were the cities for which full data were available.

A few people were offended by the conclusion that Philly residents don’t exert themselves sufficiently.

“Geez, they’re always calling us the saddest city for one thing or another,” said Todd Scott, 57, owner of Platoon Fitness, a Center City gym. “But if people weren’t working out, how could someone like me be in business? You see people running all the time.” (A lot of outdoor jogging picked up across America when gyms closed during the worst of the pandemic, experts say.)

The report is “complete b.s.” according to Mark Berman, a 51-year-old South Philadelphia graphic designer and a runner. He said there’s a little-seen kinetic community of runners who clog the streets in the early-morning hours, while the weak and flabby among us hit the snooze button, contemplating breakfasts of syrup-soaked pancakes.

“Over the years, there’s been an exponential increase in the number of runners,” said Berman, citing the growing popularity of running clubs. “That study — I just don’t buy it.”