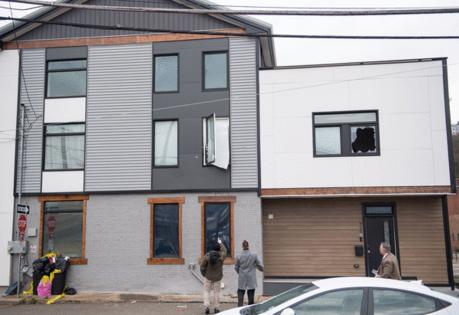 PITTSBURGH — When police officers and paramedics arrived at the scene of the Pittsburgh shooting in the early hours of April 17, they rushed to transport the injured to the hospital.

Time is of the essence in such situations. It can take as little as five minutes for a person with a life-threatening injury to bleed to death. Much like CPR, basic bleeding control techniques could help save a life in the event of an emergency.

"If someone has life-threatening bleeding and they have minutes to live, you can't rely on medical personnel," said Dr. Matthew Neal, a trauma surgeon at the University of Pittsburgh Medical Center who cared for many of the critically wounded victims of the Tree of Life synagogue shooting in 2018. "Bystanders are going to be the first people there."

Dr. Neal is an advocate of Stop the Bleed, an effort that teaches people first aid skills for controlling bleeding. It was introduced in the wake of the Sandy Hook Elementary School shooting in 2012, which killed 26 people.

With gun violence on the rise in the United States, the odds of being at the scene of a shooting are increasing. But the techniques also apply to other scenarios that can cause significant bleeding, such as car accidents.

The first thing to do when a shooting or serious accident occurs is to alert the authorities as soon as possible.

"It's really easy in a chaotic scenario to think that everyone else has done it," said Dr. Allan Philp, head of trauma at Allegheny Health Network, who treated the North Side shooting victims. "But you want to make sure that someone has actually called 911 so that professional help can arrive as quickly as possible."

He emphasized the "run, hide, fight" approach in an active shooter situation. Flee the area if you can and call 911 once you're safe. If you can't run, get out of the shooter's view and remain quiet. As a last resort, and only if you're in immediate danger, try to stop the shooter.

Q: I read a lot online about vaccines. Do kids really need so many shots?

A: Childhood vaccination has been one of modern medicines biggest success stories. In fact, vaccines for children have been so successful that we ...Read More

''The weather is changing....Read More

They might have a smelly-sounding name, but muskmelons, like cantaloupes and honeydew, are actually sweet fruits full of flavor and nutrients.

"Muskmelon is an overarching term that includes cantaloupe and honeydew. These...Read More

DEAR MAYO CLINIC: I was recently diagnosed with osteoporosis and my health care team suggested that I eat a bone-healthy diet to prevent more issues and maintain strong bones as I age. What is osteoporosis, and how can I ...Read More

DEAR MAYO CLINIC: I have been diagnosed with a mild case of irritable bowel syndrome, and I talked to my doctor about managing my symptoms without medication. I am interested in trying to focus more on diet to control my ...Read More