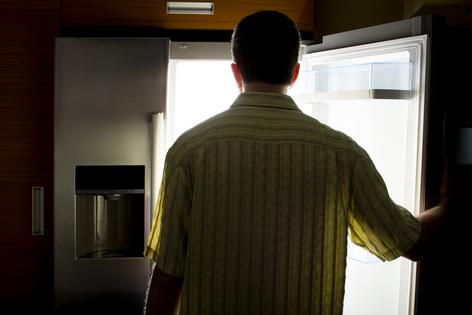 You may have heard the adage, “Eat breakfast like a king, lunch like a prince, and dinner like a pauper.” But the truth is most of us snack in the evening, sometimes even after a large dinner. According to the Washington D.C.-based International Food Information Council’s 2021 Food and Health Survey, about 65 percent of those surveyed said they eat at least one snack in the evening and almost 50 percent report that they consume at least one snack between 9 and 11 pm. The question often asked is, can eating at night make it harder to lose weight, or even make you gain weight?

A well-controlled study of 32 young women, published in the International Journal of Obesity found that eating late is associated with a reduction in calories burned and reduced glucose tolerance, among other detrimental effects on metabolism. Whether this would be true in a wider age group or in men in addition to women isn’t known.

Another study out of Japan found that among 11 young women, nighttime snacking not only reduced the burning of fat, it increased levels of total and LDL cholesterol in the blood, suggesting that nighttime eating changes fat metabolism and may increase the risk of weight gain and obesity.

Research with mice, published in Chronobiology International, found that the timing of food intake may be even more important than regular exercise for preventing obesity. Mice are nocturnal animals and when made to eat during the day, weight gain resulted.

According to Colleen Rauchut Tewksbury Ph.D., MPH, RDN, CSOWM, LDN, National Spokesperson for the Academy of Nutrition and Dietetics, there are very small, controlled studies showing that eating earlier is better for weight management than eating later, which may slow weight loss. While the answers are not all in, she says, “My take is that there may be something here. Early data suggests that timing of eating could be an important factor in weight management, but the evidence isn’t to the point that we would issue a blanket recommendation that all late eating is detrimental to health.”

While the “why’s” and “how’s” of late-night eating on weight aren’t clear, there are a few reasons why late-night snacking could be a problem.

Late night snacking is often done in sync with watching streaming or television or even reading. Your focus is likely on the movie you’re watching or the book you’re reading, not the calories you’re consuming. Any reputable weight-loss program includes instruction on how to be mindful of what you’re putting in your mouth and not combine eating with any other activity, like watching television or reading. The results of a study of more than 800 men and women, who kept food diaries for one week, showed that foods eaten late at night lack the satiety of foods eaten at other times of the day, which results in an increase in food intake, a greater calorie intake for the day, and ultimately weight gain.

A uterine fibroid is a benign or noncancerous growth of the muscle portion of the uterus. While common, they may cause pain and excessive bleeding, and concerns about fertility and pregnancy for some.

MANKATO, Minn. — Learning your ABCs can alert you to changes in moles that could signal melanoma — the most serious type of skin cancer.

DEAR MAYO CLINIC: I love the changing seasons and am looking forward to the warmer days of spring. Unfortunately, I am often miserable because of seasonal allergies. What can I do to keep the box of tissues at bay and ...Read More

DEAR MAYO CLINIC: I love the changing seasons and am looking forward to the warmer days of spring. Unfortunately, I am often miserable because of seasonal allergies. What can I do to keep the box of tissues at bay and ...Read More

Stroke is the second-leading cause of death worldwide, according to the World Health Organization. In the U.S., about 800,000 strokes occur per year.

Of all strokes, 87% are ischemic. This means they occur when a clot ...Read More

After years of trying to have a baby without success, Brenna Kaminski and her husband, Joshua Pritt, decided to try in vitro fertilization.