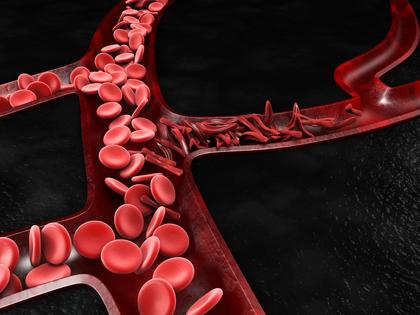 These days, most cases of sickle cell disease in the U.S. are diagnosed through newborn screening. It’s important to make the diagnosis early, so that babies can be started on penicillin (or another antibiotic) to prevent infection. Getting connected early to a pediatrician for primary care — and to specialists in blood disorders who can work closely with the child as they grow, and with their families — can help prevent complications of the disease.

Hemoglobin is the part of the red blood cell that carries oxygen. In sickle cell disease, the hemoglobin can change the rounded shape of red blood cells into a C-shape that is crooked, like the tool called a sickle. When that happens, the cells get sticky and can clog up small blood vessels. It also makes the red cells more fragile and likely to break apart, causing anemia.

Millions of people around the world have sickle cell disease, or SCD. In the US, the Centers for Disease Control and Prevention (CDC) estimate it affects about 100,000 people. It occurs in about one out of 365 Black or African American births, and one out of 16,300 Hispanic American births.

Is SCD a genetic disease?

Yes. All of us have two genes that decide what kind of hemoglobin we have, one from each parent. People with sickle cell disease have two copies of the sickle gene, inherited from both parents. If someone has one copy, they have “sickle cell trait,” meaning that they are a carrier of the gene.

There are other kinds of genetic hemoglobin diseases, such as thalassemia or hemoglobin C. Sometimes people are born with one sickle gene and one gene for a different hemoglobin problem. The severity of their condition depends on the particular hemoglobin combination.

Currently, there is no cure for sickle cell disease or the other genetic hemoglobin diseases, except for bone marrow transplant or stem cell transplant.

May is National Osteoporosis Awareness and Prevention Month, which makes this a good time to learn more about this bone disease. Osteoporosis affects approximately 10 million people in the U.S., 80% of whom are women, ...Read More

The average healthy woman begins menopause at 51, though some women will begin in their 40s or in their late 50s. It's a natural biological process that marks the time a woman ends her menstrual cycle.

Q: My teenage son has autism and I want to help him navigate the transition to being an adult, including adult health care. How can I do this?

As the Supreme Court appears poised to return abortion regulation to the states, recent experience in Texas illustrates that medical care for miscarriages and dangerous ectopic pregnancies would also be threatened if ...Read More

It’s estimated that millions of people in the U.S. use period-tracking apps to plan ahead, track when they are ovulating, and monitor other health effects. The apps can help signal when a period is late.