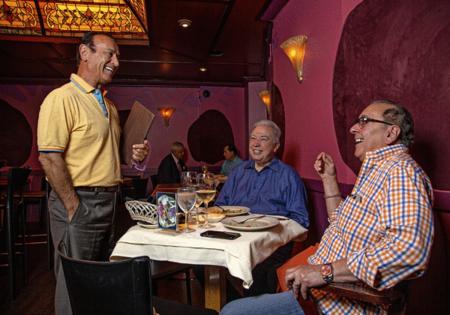 MIAMI -- Everyone thought it odd when Nino Pernetti called the afternoon of Dec. 31, 2020, to say he was skipping the annual New Year’s Eve dinner at his landmark Coral Gables, Florida, restaurant of more than 30 years, Caffe Abbracci.

He injured his ankle while playing his daily round of tennis, he told his friends, family and staff at the restaurant where athletes, actors and politicians dine in anonymity. The doctor, he said, instructed him to put up his leg and rest it for a week.

“We should have known better,” his ex-wife Marlén Pernetti said. “Nino would not miss Caffe Abbracci on a 31st. He would’ve shown up on crutches.”

Days later, his oldest daughter, Tatiana Pernetti, just home from an overseas vacation, got a FaceTime call from her father. He was at the hospital. Come quickly, he told her: In 40 minutes, he would be transferred to the COVID-19 ward at Mercy Hospital, where no visitors were allowed.

“I ran over and spent as much time as I could with him,” she said.

More than a year later, Nino Pernetti has not returned home.

Pernetti remains in a rehab facility, where he has quietly endured the ravages of COVID-19 with the discretion he usually reserves for his roster of celebrity diners. Behind that veil of secrecy, he is fighting for his life.

Pernetti, who celebrated his 76th birthday at Jackson Memorial in July, lost nearly 50 pounds at one point. He needed a tracheotomy to help him breathe with lungs riddled with fibroids and scar tissue caused by the coronavirus. He was denied a lung transplant because of ongoing issues with his heart. And he remains on machine-assisted breathing, while he relearns to speak and walk after spending most of the last year in hospital beds.

“So many people still do not take this virus seriously, maybe because it hasn’t hit them close to home,” Marlén Pernetti said. “I wish people would understand this is live or die.”

In the past year, the Pernettis have learned what it means to endure the worst of COVID-19 — the toll it takes on a body and a family. But it also has brought out the best in the people closest to him, healing decades-long wounds that don’t show up on chest X-rays.

Reinstein is just 60 years old, and Hall is 54. Both of them have young...Read More

Stephen Kavalkovich serves on the planning board of his Burlington County, New Jersey, hometown, where he also became an emergency medical technician, began his recovery from opioid addiction, and founded a shamanic ...Read More