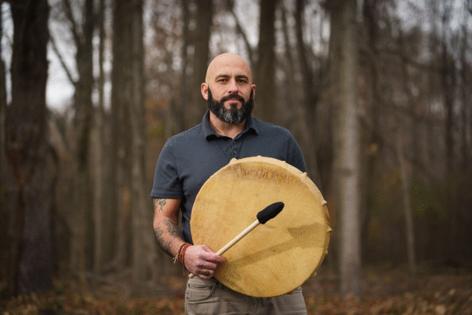 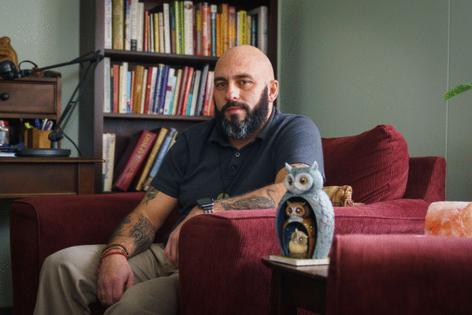 Stephen Kavalkovich serves on the planning board of his Burlington County, New Jersey, hometown, where he also became an emergency medical technician, began his recovery from opioid addiction, and founded a shamanic practice called Ancient Healing Pathways.

"The word shaman means someone who sees in the dark. I've had a lot of dark, and my own healing journey has groomed me to find ways to help other people heal," said the 40-year-old Evesham Township resident, who's married to a teacher and has a son and a daughter, ages 13 and 10.

"To be a shaman," Kavalkovich said, "you don't have to be some mystical guy who lives on a mountain."

Raised in the Russian Orthodox church — he was an altar boy at Assumption of the Holy Virgin in South Philly — Kavalkovich is a state-certified recovery specialist who works with individuals re-entering the community after incarceration.

That's his full-time gig. As Owl Grey Fire ("I have always felt connected with owls"), he offers shamanic healing sessions. He said this time-honored spiritual practice, which combines elements of ceremony, light-touch massage, and talk therapy, can facilitate what he calls "soul retrieval."

Shamanic practice is compatible with more conventional approaches to mental and physical wellness, he said, and it has nothing to do with the so-called "QAnon Shaman," Jacob Chansley, who was among those storming the U.S. Capitol on Jan. 6, 2021.

A soft-spoken man with a ready smile and an alert gaze, Kavalkovich was born a triplet and believes the death of his brother Matthew, 24 hours after their birth, was the first of several "woundings" he suffered. An attempted sexual molestation by a youth group leader, and a former high school girlfriend's death in a traffic accident, also traumatized him, as did his 15 years of living in addiction.

"Shamans were the original trauma therapists," he said.

After stints in rehab, an arrest for drug possession in Kensington, and an overdose that brought several of his former Evesham Fire-Rescue colleagues to assist him at his parents' home in Marlton, Kavalkovich's recovery journey began in 2016.

The disease cost him his career as a paramedic, as well as his first marriage. Medically assisted treatment "gave me somewhere to start from," said Kavalkovich.

Long before it was proclaimed a modern-day superfood, spirulina was reportedly cultivated and consumed in Aztec culture. Today, EN explores the popularity and proof behind spirulina.

Spirulina is a microscopic...Read More

Often, the skin can be a window to what is occurring inside your body. For women with polycystic ovary syndrome, or PCOS, this this may mean acne, hair loss, excessive facial or body hair growth, dark patches on the skin, ...Read More

DEAR MAYO CLINIC: My doctor told me that I have congestive heart failure and I have to change my lifestyle, including my diet. What kind of diet should I be on?

ANSWER: When patients have congestive heart failure, their ...Read More

SACRAMENTO, Calif. — In any other year, Gov. Gavin Newsom's proposal to add an estimated 700,000 immigrants without legal status to the state's health care program for low-income residents would be a monumental lift. On ...Read More