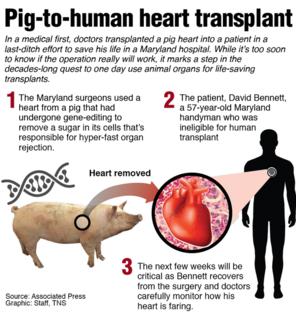 SAN DIEGO — Physicians at the University of Maryland Medical Center stunned many people this week when they announced that they had successfully transplanted the heart of a pig into a 57-year-old man who was dying of a heart disorder.

It was the first successful attempt to place a pig’s heart into a human. And it immediately raised hopes that such a procedure could eventually be used to treat large numbers of people who need a new heart to survive.

The medical team used the heart of a pig that had been genetically modified 10 times in hopes of making the organ perform normally in the recipient, Maryland resident David Bennet Sr. MIT Technology Review reported Tuesday that three of the genes were “knocked out” to help prevent Bennett from rejecting the organ, and that six genes were added to help his immune system to accept the heart. The 10th gene was altered to stop excessive growth of pig heart tissue, the magazine said.

The breakthrough raised a lot of questions about the potential benefits and downsides of placing animal organs in humans.

Q: There have been many big advances in science in recent years, including the rapid development of COVID-19 vaccines. How significant is this new pig-to-human heart transplant?

A: It’s a little early to say. But this is a transformative moment in the history of transplant medicine, maybe the second-biggest moment since the first human heart transplant in 1967. It could have an even bigger impact if this (approach) ends up affecting other organs. It could have an impact on all of clinical medicine. (You might have) enough kidneys so you don’t have to do dialysis, enough livers so we can treat all people with liver disease.

At the very least, this is the biggest advancement in heart transplants possibly since the dawn of transplantation.

Q: Did you think it was going to take longer to make this achievement?

A: People have been talking about it. But it still felt like we very far away from seeing patients get organs.

COVID-19 vaccines protect you from getting sick. The Centers for Disease Control and Prevention (CDC) says people who are up to date with their COVID-19 vaccinations and booster shots are well-protected from serious ...Read More

DEAR MAYO CLINIC: I threw out my back doing yardwork. While I was laid up for a few weeks, I'm OK now. I'm concerned I will reinjure my back shoveling snow this winter. How can I protect my back while shoveling?

ROCHESTER, Minn. — Winter is a wonderful time of year, especially if you can avoid slipping, falling and getting hurt.

Sanjeev Kakar M.D., a Mayo Clinic orthopedic surgeon who specializes in injuries to the hand and ...Read More

There are various types of COVID-19 tests that people may choose from to find out if they are infected with the virus.

Q: What can I do to protect my family from lead exposure? Should I have my children tested?

A: Protecting children from exposure to lead is important to lifelong good health. Even low levels of lead in the blood have been...Read More