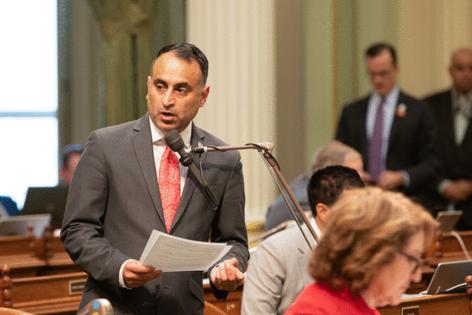 SACRAMENTO, Calif. — California would enact a sweeping, first-in-the-nation universal health care plan under a proposal unveiled Thursday by a group of state Democratic lawmakers, providing health services to every resident and financed by a broad array of new taxes on individuals and businesses.

Though some of the policy details of the ambitious plan were laid out last year, the way to fund it had not been determined. The proposal, now laid out in separate pieces of legislation, faces significant hurdles in the coming months — first at the state Capitol, with opposition from groups representing doctors and insurance companies, and then possibly at the ballot box, as voters would have to approve the taxes in an amendment to the California Constitution.

“There are countless studies that tell us a single-payer health care system is the fiscally sound thing to do, the smarter health care policy to follow, and a moral imperative if we care about human life,” Assemblyman Ash Kalra, a San Jose Democrat and the proposal’s author, said Thursday.

Efforts to create a single-payer health care system, in which medical expenses for all residents are covered by a government-run fund, have been widely discussed in California for years. Supporters say the cost of providing care to the state’s residents would go down without the administrative expenses of private insurance plans.

They also point out the costs incurred by Californians under slimmed-down health care plans with high deductibles and copays — costs they argue will disappear if California creates a state-run program that blends state and federal dollars.

“What we’re trying to do is get rid of these dozens of buckets of funding — whether it’s private insurance, whether it’s employer, whether it’s Medi-Cal — put it into one bucket,” Kalra said.

Legislative efforts to push the idea forward have fizzled over recent decades, lacking the broad-based political support needed for a historic overhaul of the health care system. Kalra’s newest effort was quickly criticized by a coalition of powerful political players, including the California Medical Association and the California Hospital Association. They will square off against one of the single-payer plan’s most vocal advocates, the California Nurses Association.

Assembly Bill 1400 would create “CalCare,” a system governed by an independent board of directors that promises access to any doctor, regardless of network, and a wide variety of medical services. The new entity would push to bring payments to providers more in line with the costs of care and would seek to negotiate lower prices for prescription drugs. The plan includes long-term care coverage and services for senior citizens and disabled people, and would remove barriers based on a patient’s immigration status.

Thursday’s announcement will undoubtedly set in motion a contentious process, possibly complicated by the politics of it being an election year. Gov. Gavin Newsom, who faces reelection in the fall, campaigned for office four years ago in part on support for a single-payer health care system.

“It’s about access,” Newsom said in a speech at the California Democratic Party convention in 2018. “It’s about affordability. And it’s about time."

A “very rare” case of bird flu was diagnosed in a person in southwest England, the U.K. Health Security Agency said Thursday.

The person had been in close contact with infected birds, and human-to-human transmission ...Read More

DEAR MAYO CLINIC: I have two children, ages 12 and 15. They are both good students, participate in athletics and enjoy spending time with friends. While both kids are back to in-person school after the COVID-19 pandemic, ...Read More

LONDON — Asthma is a condition where airways narrow and swell, possibly producing extra mucus and other symptoms. While asthma affect adults, it's the most common long-term disease in children. More than 262 million ...Read More

Chris J. Hanson was preparing to leave his beachfront hotel on the last day of vacation when his mind started malfunctioning in a rare and mysterious way.

As he put on a shirt, he told his wife, Bobbi-Jo, that he wished ...Read More

If you're sick with COVID-19, don't bother trying to find out which variant is causing the infection. Outside of a research study, there is little chance that an individual patient will be able to learn ...Read More

All Americans are protected as of Jan. 1 from unexpected out-of-network medical bills, thanks to the implementation of legislation to ban surprise medical billing, but many lawmakers want the Biden administration to make ...Read More