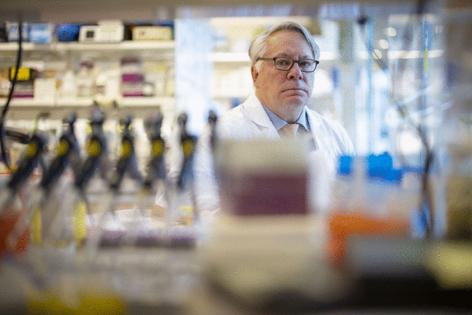 CHICAGO -- Some people look and act younger than they are. Others seem to age prematurely, acquiring wrinkles, gray hair and an assortment of health problems earlier than their peers.

Now, a new institute at Northwestern University Feinberg School of Medicine will aim to find out why, and whether there’s a way to slow or reverse the aging process and the toll it can take on people’s health. The Potocsnak Longevity Institute, which is launching this month, will focus on research related to aging, and on treating patients suffering from its effects.

“Age is the most important risk factor for almost every disease we deal with, so if we can just slow down aging a little bit, we can impact the development of heart disease, cancer, lung disease,” said Dr. Douglas Vaughan, director of the new institute and chair of medicine at Northwestern. “It’s the one huge risk factor we don’t address in any type of way right now.”

The institute, funded with a donation from Chicago industrialist John Potocsnak and his family, plans to start accepting patients in coming months. Interested patients will be able to undergo a battery of tests designed to help assess their physiological, rather than chronological ages.

Based on a person’s test results, doctors may then recommend certain interventions or medications, Vaughan said. The goal is to prolong the amount of time individuals can live in good health. Vaughan expects that health insurance plans may cover some of the services but not all. He said Northwestern plans to try to broadly serve patients by using some of its own resources and the endowment.

“Everybody ages at different rates, and it’s possible in 2021 and 2022 to accurately measure that biological age as opposed to your chronological age,” Vaughan said. “Most people are relatively close to where they’re supposed to be, but we do see people who are way off the curve in one direction or another, and we want to try to understand it.”

Patients may also have the opportunity to participate in aging-related clinical trials. Education and research will be key parts of the institute.

The institute will build off research Vaughan has done on a group of Amish people who immigrated from Switzerland to Indiana in the 1800s. Some members of that group have a unique genetic variant that seems to protect them from parts of aging. Those who have the variant seem to live about 10 years long than those who don’t have it, and they don’t tend to as often develop certain age-related illnesses such as diabetes.

That research has already led to development of a drug, with a Japanese pharmaceutical company, that is being tested in clinical trials. Northwestern is participating in the trials, giving the drug to high-risk patients hospitalized with COVID-19 — because age seems to be one of the biggest risk factors for severe illness and death from COVID-19.

The institute will also include a center focused on HIV and aging. Though modern medications have made it possible for people with HIV to live long lives, they still seem to develop certain age-related conditions — such as diabetes, hypertension, high cholesterol and heart disease — earlier than others, said Dr. Frank Palella, associate director of the longevity institute, and director of the HIV and aging center within the institute. That’s likely because, even when HIV is well controlled, patients with the virus still experience more chronic inflammation and potentially harmful immune system activity than people without it, he said.

The center will work on developing interventions that might help people living with HIV better avoid those age-related conditions, Palella said.

That research may benefit people living with HIV and people without it, by helping doctors to better understand what leads to those conditions and how to stop or delay them, he said.

In opening the institute, Northwestern joins a number of other institutions that are exploring how to lengthen the healthy parts of people’s lives. Prominent programs include centers on aging at the Mayo Clinic, Harvard University and the Buck Institute for Research on Aging in California, which says on its website that, “We believe it is possible for people to enjoy their lives at 95 as much as they do at 25.”

The institute will allow Northwestern, which already does research on aging, to expand and accelerate that research. Northwestern already receives nearly $40 million a year in research funding from the National Institute of Aging. Northwestern is not disclosing how much it received from the Potocsnak family.

“One of our major goals is to develop interventions that are going to be able to reverse what we can reverse,” Palella said. “I don’t want to overly depict this as looking for the fountain of youth, but when we look at our aging population, in general, what are things that limit functionality? ... This brings the experts together.”

DETROIT — As black-legged ticks crawl their way across Michigan, scientists hope a new vaccine in development could make their presence less menacing.

The vaccine would rob the ticks of a trait that makes them ...Read More

Q: I would like to set some reasonable, healthy resolutions for the new year with my kids. What are some good ones to try?

A: The start of a new year is a great time to help your children focus on forming good habits. ...Read More

CHICAGO -- Before her mother’s kidney transplant, Arianna Barrett watched a medical professional carefully extract stem cells from her own neck with a feeling that she was observing scientific developments in real time. ...Read More

One of the long-term impacts observed during the COVID-19 pandemic stems from patients being intubated and breathing from a ventilator for an extended period of time. These patients usually undergo a procedure known as a ...Read More

If the COVID-19 pandemic has taught us anything, it's that frequent hand-washing is one of the best ways to avoid getting sick and spreading illness.