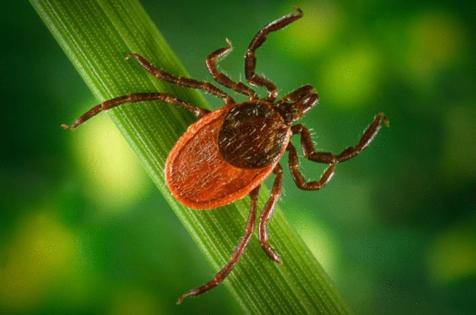 DETROIT — As black-legged ticks crawl their way across Michigan, scientists hope a new vaccine in development could make their presence less menacing.

The vaccine would rob the ticks of a trait that makes them exceptional vectors for Lyme disease: the ability to bite and suck blood without notice, latching on long enough to pass bacteria to their host human.

"Have you ever heard of anybody swatting at a tick bite?" said Dr. Erol Fikrig, an infectious disease researcher and professor at the Yale School of Medicine who is working on the vaccine development. "No. A tick is silent. It feeds on you for a long period of time."

Fikrig hopes the vaccine will cause a person to develop a physical reaction to bites from a black-legged tick, also known as a deer tick, the species that carries Lyme disease bacteria.

In a vaccinated person, the skin around a black-legged tick bite would become itchy, visible and inflamed, similar to what happens around a mosquito bite. The reaction would give someone a chance to remove a tick before it has time to transmit Lyme.

"There are very few people who are going to look at a tick bite, find a tick on them and let it remain," Fikrig said. "They'll pull it off quite quickly."

The vaccine was inspired by a natural phenomenon called acquired tick resistance. Some animals develop a natural resistance to tick spit over time; those animals develop sores around tick bites and ticks that bite them don't eat well, which can cause them to detach early. The vaccine under development is designed to induce a similar response.

There is also anaplasmosis, another tick-bite-induced disease whose symptoms include fever, headache, chills and muscle aches but which is difficult to diagnose because it doesn't leave a rash. This disease only becomes worrisome if it isn't treated early with doxycycline, medical experts said.

"We've been talking about Lyme because it's the most important vector-born disease ... but you also have anaplasmosis," Tsao said. "It's a little bit of a distant number two, but still, way more people get anaplasmosis than they do West Nile or Zika or Dengue. And then there are like five other pathogens that this Lyme disease tick transmits. So developing a vaccine against the tick is, I think, in many ways more useful."