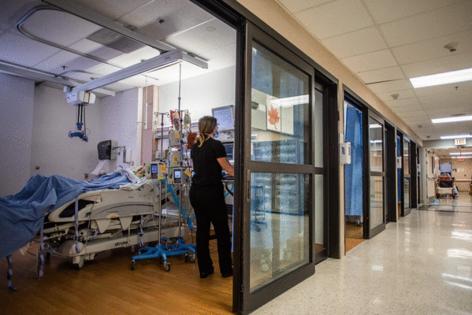 Forget car dealers; Americans are flummoxed by the marketplace for health care. Two new reports published last week show that consumers are increasingly anxious about medical costs and access to care, with record numbers signing up for subsidized health coverage. The system is not working for the majority of Americans, and the inequities are only getting worse.

A new national survey released last week shows the frustration that Americans are feeling amid the continuing grind of the pandemic. An estimated 100 million Americans would describe the health care system as either “expensive” or “broken,” according to the West Health-Gallup 2021 Healthcare in America Report. Almost half say their view of the system has worsened in the era of COVID-19. And as the Tampa Bay Times’ Margo Snipe reports, the nation’s outlook is equally grim, with nine in 10 of those surveyed saying they expect their health care costs to increase.

The United States spends nearly $4 trillion on health care, making it the most expensive system in the world. Yet it produces the worst outcomes in categories such as life expectancy, obesity rates, chronic disease burdens and suicide rates, compared to other high-income countries, according to the Commonwealth Fund. While the nation’s top one percent experience the best health outcomes, according to one West Health executive, those outcomes worsen as income decreases.

The survey, billed as the largest of its kind on health care since the start of the pandemic, shows that COVID amplified the worries that Americans have about the cost of health services and prescription drugs. Seven in 10 Americans say their household pays too much for the quality of care they receive. And the findings in Florida matched the national mood. Nearly 30 percent of Floridians report health care costs are a major financial burden. Consumers are skipping doctor’s visits because they cannot afford them. And the number foregoing care is also spiking, to about one-third of the respondents, the highest that level has reached since the start of the pandemic. And health disparities are mounting for Americans of color; while 60 percent of the survey respondents said access was an issue, that concern rose to 75 percent among Black Americans.

The concern over affordability comes as the Biden administration announced last week that a record 13.6 million Americans have signed up for health coverage for 2022 on the Affordable Care Act marketplaces, with nearly a month remaining to enroll in most states. White House advisors credited increased government subsidies, which lowered out-of-pocket costs, for the surge in enrollment. They also said enhanced outreach efforts resulted in connecting more people to insurance options.

The spike in enrollments reflects the demand for coverage in Florida, Texas and other states that have not expanded Medicaid under the Affordable Care Act. Through mid-December, enrollment in Florida had jumped to 2.6 million people, up from 2.1 million in the same period a year earlier. The program has made a dent in covering more of the uninsured. But the experience shows how prices drive a family’s medical decisions, and of how even basic care is getting out of reach for many.

Cost-shifting to government and private insurers has hidden the growing crisis in medical costs for years. And America’s bloated health care bureaucracy has never seriously confronted the middlemen who simultaneously siphon profit and limit choice. Consumers are pinched, stressed out and foregoing care, and two years of COVID has only fueled greater uncertainty. West Health and Gallup have provided a valuable snapshot of the burden and pessimism consumers are carrying. Expensive, broken, unfair — that’s hardly a health system for America or a model for the world.