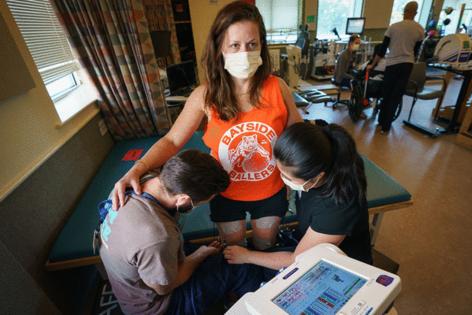 She fell to the ground, hit in the back by a stray bullet, and was taking in breaths that grew increasingly painful. The 36-year-old was motionless from the waist down while her teammates, some of whom work in the medical field, tended to her until paramedics arrived.

It has been seven months since that shooting just after 9 p.m. on May 19, when a gunman opened fire in Hancock Playground, hitting a 16-year-old boy in the shoulder and striking Lyons in the back. No one has been arrested.

The split second left Lyons paralyzed with a severed spinal cord and relegated her to a wheelchair indefinitely, forcing her to adapt to a life that looks completely different from the one she had planned. An occupational therapist by trade, Lyons is now the type of patient she used to treat: a gunshot victim who must learn new techniques to perform basic tasks.

Her experience in medicine also means she is acutely aware that she was inches from an outcome worse than paralysis. Just after Lyons awoke in the hospital, she video-chatted with her mother. The first thing she said was: "Mommy, I could have died."

"I'm still mourning the loss of my old self," she said. "I'm still in some denial about having to be in a chair, and I still wake up and am like, is this nightmare over? Was this all a nightmare?"

That "old self" was athletic, bubbly, and fearless. Lyons is a Jersey native with a bit of a no-nonsense temperament, and was that person at every party who always had a smile stretched ear to ear. Relentless optimism is a part of herself she's tried to harness now, even through unimaginable pain.

Still, the sheer randomness of the gunfire knocked Lyons'— —life off its axis and traumatized her, her friends, and her family. It came amid a spike in shootings in the city, a surge that exploded in the spring of 2020 and has left thousands of people in Philadelphia with life-altering injuries.

And she's one of many in Philadelphia hit this year by an errant bullet, a group that also includes a 13-year-old girl shot while riding in a car, a Drexel student struck while watching fireworks in July, and a 66-year-old man killed while driving by his alma mater.