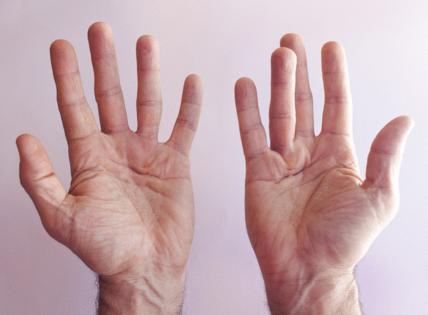 DEAR MAYO CLINIC: I have a painless mass in my palm that has been getting larger over the past year or so. It is firm, and when I extend my fingers, I feel it stretch like it is under tension. What is this mass, and how do I treat it?

ANSWER: You may have the beginnings of a condition called Dupuytren's contracture or Dupuytren's disease. The cause of this problem is thickening of the palmar fascia, which lies beneath the skin of your palm. It is a genetic condition that tends to predominantly affect people of northern European ancestry. It occurs in men more so than women, and it is most common after 50. Thankfully, it is a benign condition, and though it can be annoying, it is generally not painful. There is no known cure.

The natural history of Dupuytren's contracture can be variable, but there tends to be a slow but steady progression. It generally starts as a nodule in the palm and evolves into cordlike structures that extend into the fingers. The ring and small fingers are more commonly affected, but any digit or thumb can have cords. These cords can thicken as they further develop, and they can act as a tether that will draw the finger into a more flexed position, limiting your ability to extend the finger. Thankfully, you can still typically make a fist. Occasionally, we will intervene or treat a rare painful or prominent nodule, but the most common and primary indication for treatment is this loss of extension that develops over time.

I tend to see patients in two population groups with Dupuytren's contracture. The first group consists of those patients with early disease who are understandably curious or concerned. The second group consists of patients who know what they have, but the contracture has grown and is severe enough to limit function of day-to-day activities. Patients with contractures develop difficulties with activities that require precision with the hands and fingers, such as putting gloves on, putting their hand in a pocket, washing their face, shaking hands, etc.

There are several treatments for Dupuytren's contracture, including those done in an office setting and surgical intervention. The office-based procedures are newer and have gained in popularity over the past 15-20 years. These procedures seek to weaken the cord and effectively allow for release of the fascia with an extension force. The two most common procedures are a needle aponeurotomy and collagenase enzyme injections.

With a needle aponeurotomy, the cord is marked approximately every centimeter in evenly spaced intervals. Local anesthetic is injected into the skin at each of those intervals to numb it. Then the bevel of a needle is inserted through the anesthetized skin to effectively cut the cord beneath it at each of those intervals. This is done while maintaining the finger as extended as possible, as that maneuver makes the cord taut. This needling is done sequentially along the extent of the cord as it courses into the finger. The repeated needling effectively weakens the cord so that it can release with an abrupt extension, resulting in improved finger extension.

Collagenase clostridium histolyticum (Xiaflex) is an enzyme that was approved for use in 2010. It is an injectable protein fluid that is inserted into the cord to weaken it. The process requires two visits to a physician: the first day to inject the cord and a subsequent day — typically three to seven days later — to perform the release. On the release date, the hand or finger is anesthetized prior to releasing the contracture.

Orthopedic surgery has been a mainstay of treatment for many years. It is a more involved process for the patient and includes the need for anesthesia, a wound with sutures, and a more extensive recovery, including the need for hand therapy postoperatively. Though more involved, surgery carries the advantage of being the only procedure that removes the diseased fascia or cord. While it typically affords a longer disease-free interval, Dupuytren's contracture can recur following surgery. In addition, recurrence following surgery is more complex, as surgery invites a variable amount of residual scar that compromises the prognosis for any subsequent treatment.

In most cases, the decision regarding how and when to proceed with intervention will be largely up to the patient. Typically, I recommend treatment when day-to-day activities become challenging. Talk with an orthopedic hand specialist who can help inform and guide you through each option, and the risks and benefits to help decide what is best for you.