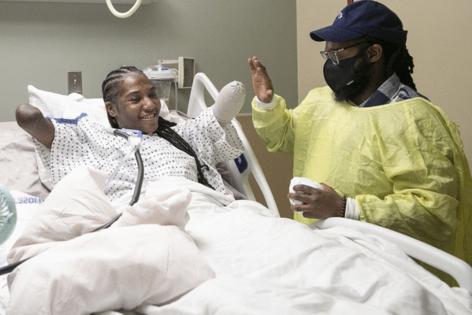 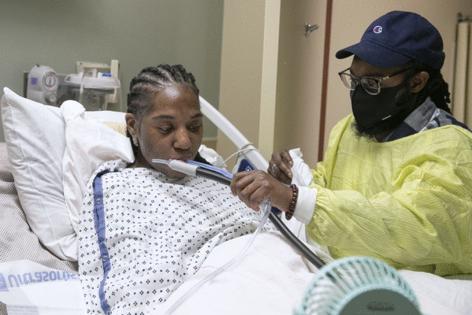 PHILADELPHIA -- When Candice Davis contracted COVID-19 in August, she quarantined herself in her South Philadelphia apartment and settled in for what she thought would be a short recovery.

But within days, Davis, 30, was in the ER, shocked by the directive she’d just gotten from a doctor: Go on a ventilator, or risk death.

Three weeks later, she woke up to her mother, Paige, standing over her. “Baby, I know this is going to be sad,” she said, “but you have to make a decision.”

In the weeks she lay unconscious — during which doctors had to transfer her from a ventilator to an ECMO machine, a device that pumps oxygen directly into the blood — Davis had developed life-threatening heart complications, and then circulatory issues in her arms and legs. Now, her mother told her, she was again facing a life-or-death decision. For her to survive, doctors would have to amputate her arms.

Davis is one of a small, but growing, population of COVID-19 patients who suffer one of the disease’s most serious complications — circulatory crises caused by clotting that diminishes blood flow to the limbs. Tissue dies and infection sets in, doctors said. The affected limbs have to be removed for the patient to survive.

The risks are highest for older people with preexisting conditions like diabetes and peripheral arterial disease. And at the same time, doctors warn, they are having to perform more amputations on people with diabetes, some of whom didn’t have COVID but who may have avoided needed medical care during the pandemic.

But as Davis illustrates, it can happen even to young, healthy people who do not have diabetes or other preexisting conditions.

Now, with COVID-19 cases rising and the omicron variant sparking new fears, Davis is telling her story to urge other young people to take the pandemic seriously.

In the weeks after Davis woke up, she lost her arms below the elbows, a leg below the knee, and part of one foot.

January is Cervical Health Awareness Month, which makes this a good time to learn about Pap smears.

More and more of us are becoming political junkies looking for our next dopamine hit.

Dopamine, that pleasure reward in our brain, is offered as encouragement for most people when we do good things and is the reason our ...Read More

Keeping to a New Year's resolution is so difficult for some that there's even a day on the calendar for those unsuccessful to abandon their plans: Jan. 17, which is known as "Ditch New Year's Resolution Day." But before ...Read More

Dhaval Bhatt had been warned about hospital emergency rooms.

“People always told me to avoid the ER in America unless you are really dying,” said Bhatt, an immigrant from India who got a Ph.D. in pharmacology in the U...Read More

Health care spending in the United States far exceeds that of other Western nations and results in far-worse outcomes than in countries with single-payer systems.

The Centers for Medicare and Medicaid Services reports ...Read More