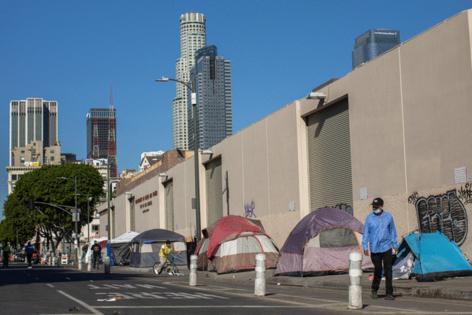 Dear Healthy Men: I see a lot of media coverage of homeless women (and, as we get closer to the end of the year, I receive a lot of solicitations from shelters for homeless women). But as I walk through our downtown area, it seems that most of the people panhandling or living on the street are men. What’s the actual gender breakdown and why don’t we hear more about unsheltered men?

A: Great questions. Let’s take a look at some background data, starting with the term I’m glad you used, “unsheltered,” which is more than just a nicer way to refer to homeless people. Of the nearly 600,000 Americans who are homeless on any given night, 65 percent are able to sleep in shelters, while 35 percent sleep in a place that’s not meant for human habitation, such as the street, in a car, or in an abandoned building, according to the National Alliance to End Homelessness. The NAEH estimates that, overall, 70 percent of homeless people are male, and that men are more likely than women to be unsheltered.

This is especially true for single fathers who are homeless — a man who isn’t fulfilling his role as provider/protector isn’t considered worthy of our help and compassion. Those gender biases have led many shelters to open their doors to more women than men — or to reject men outright.

In addition, because so many of the homeless have substance abuse and/or mental health problems, they — especially the men — are seen as shirking or malingering and, again, don’t deserve our assistance.

There’s no question that homeless people suffer from the stress, inconvenience and humiliation of not having a permanent place to call home or a bed to sleep in. But homelessness — whether sheltered or unsheltered — also poses some very significant health risks, especially to men, who are already, on average, less healthy than women.

People living on the street or in shelters are exposed to infectious diseases, violence and weather extremes; they can’t safely store medication for chronic concerns such as asthma, diabetes and high blood pressure, so those conditions get worse over time; they don’t have convenient access to health care or a quiet place to recover from illness; they don’t have easy access to bathing facilities, so otherwise minor injuries are more likely to get infected; and it’s hard to maintain a healthy diet or get regular exercise, both of which are crucial to maintaining overall good health.

“People who are homeless have higher rates of illness and die on average 12 years sooner than the general U.S. population,” says the NHCHC. Other advocacy organizations, including Health Care for the Homeless, put the life-expectancy gap at closer to 30 years.

So the next time you think about the face of homelessness in America, remember that that face is most likely a male one. And as you think about how to spread goodwill at this time of year, consider supporting one of the organizations I mentioned above or a local organization that serves the homeless. But be sure you ask whether that service extends to those most affected: men and boys.