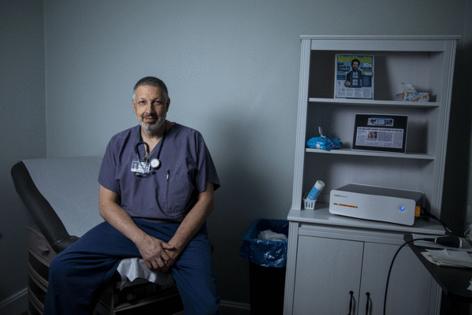 At Forge Medical Group, Borgese, who charges $3,000 for 12 sessions, has treated more than 700 men. Four in 10 of them can have sex without medication after having shockwaves, he said. Another four can achieve success with pills, which had stopped working before shockwave.

Borgese sees it as a win-win. "It's a fun job. It's much less stressful, and I help people."

The Sexual Medicine Society of North America begs to differ.

In a recently published position statement, it said that low-intensity shock wave therapy, aka shockwave, and other "restorative" treatments are "promising" but are not yet ready for widespread clinical use. There's not enough information from placebo-controlled trials about how well different devices and treatment protocols work or how long any benefits last, the group said. The treatments, it added, should be offered only to patients enrolled in clinical trials. The organization said it is not "appropriate or ethical" to "advertise or otherwise make implicit or explicit claims of efficacy for these therapies pending further data."

"None of these things that are being touted in the community and by some doctors are FDA approved," said Trinity Bivalacqua, a Penn Medicine urologic oncologist who co-wrote the society's position statement. "None of them have been proved effective in an appropriately designed, randomized, controlled trial."

Doctors use a variety of devices to deliver the shockwaves — these are pressure waves, not electricity — and it can be hard for patients to know which a community doctor offers. The shockwaves fall into two main categories: focal and radial. Radial waves — what Borgese uses — cover a broader area, but do not penetrate as deeply. There is more evidence from basic science and clinical trials that focal waves may trigger healing in tissue and improve erections.

Bivalacqua was especially critical of radial-wave machines, which are far more common in community practices because they are cheaper than focal devices. Radial waves, he said, are not powerful enough to induce the tissue healing, such as creation of new blood vessels, needed to restore natural function. "It's not going to work," he said.

Other restorative treatments include injections of platelet-rich plasma (PRP or P-shots) and stem cell therapy. Both are made from patients' own blood. Bivalacqua will soon be involved in a trial that will test whether injected cytokines, which are immune substances, can mobilize stem cells in the penis to repair tissue.

He said some people who offer radial shockwaves are not urologists or sexual medicine experts. Many of these physicians, he said, are not treating the underlying disease but are "more interested in financial rewards." Insurance, which offers spotty coverage for approved erectile dysfunction treatments, doesn't cover restorative therapy at all.