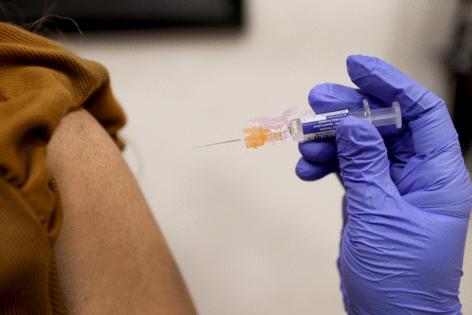 This year, flu is off to a faster start and contagion is increasing, especially among children and young adults, according to the CDC.

Public health officials have been warning for weeks that flu could be rough this year as people tired of masking and social distancing and, emboldened by COVID-19 vaccines, gather inside. Those who are not newly vaccinated for flu may have less immunity than usual because so few people caught the virus last year.

The late fall and winter picture could be complicated and confusing as two powerful respiratory viruses with very similar symptoms spread at the same time. It's possible to be infected with both at once, and both can spread without symptoms. A possible surge of both viruses, which some have labeled a twindemic, could further strain health-care and testing providers.

Some college campuses are already reporting outbreaks of flu, which doesn't bode well for parents and grandparents as students head home for Thanksgiving. Rowan University has had about 180 cases since Nov. 1, although the numbers are falling now. The University of Michigan has had almost 700 cases this month. Schools in Florida and Georgia, as well as the University of Mississippi, are also reporting cases.

The Pennsylvania Department of Health said it was not aware of any college outbreaks in the commonwealth. The University of Pennsylvania, which began requiring students to get flu shots this year, has not yet had any cases, said Mary Kate Coghlan, director of student wellness. At Pennsylvania State University, 273 students have tested positive for flu, more than usual for this time of year. Wyatt DuBois, assistant director of public relations, said the university is using a more sensitive test this year and testing demand is high as students prepare to travel. "University Health Services is taking this trend seriously and is in close contact with local and state health authorities and they are offering guidance at this time," he said.

The Michigan outbreak, though, was large enough to attract the attention of the CDC, which sent investigators. In a university announcement, Juan Luis Marquez, medical director at the Washtenaw County Health Department, said, "While we often start to see some flu activity now, the size of this outbreak is unusual."

He said those cases wouldn't necessarily affect the local community immediately, "but it does raise concerns about what the flu season may bring."

Philadelphia-area health leaders also worry about what will happen as infected students fan out across the country. "It's really the makings of a spreader event," said David Cennimo, an infectious-diseases specialist at Rutgers New Jersey Medical School.

So far, he said, the situation looks different than it did last year, but it does not yet seem unusually dire. "It really looks like we're back to normal," he said.