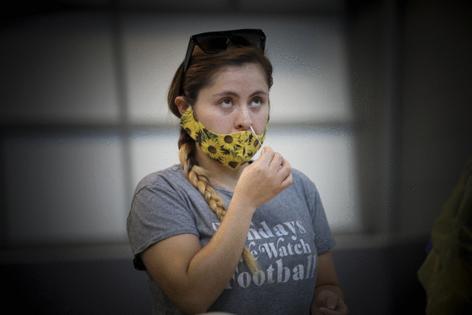 LOS ANGELES — Even with nearly 63% of Californians fully vaccinated, some public health officials worry that big gatherings this holiday season could lead to big outbreaks of COVID-19. But families looking to reunite have at least one infection-averting tool that they didn't have last year: rapid at-home testing kits.

The kits aren't foolproof, and most aren't as reliable as the lab-based alternative when it comes to detecting infections in their earliest stages. Also, the cost can be high if you have to check a houseful of people.

If used in the right circumstances, however, an at-home test can warn you in a matter of minutes if Cousin Antoine's cough or Aunt Maggie's muscle aches are signs of a potentially grave threat to the rest of the family. Even better, the tests can make it easy for your invited guests to check for an active infection before they trundle off to your home.

One other crucial caveat: If you haven't been fully vaccinated, the Centers for Disease Control and Prevention cautions against traveling to that holiday get-together. And if you're determined to travel sans vaccination, the CDC recommends doing so only if you get a negative COVID test one to three days days before departure, then quarantining for seven days after arrival (or fewer, if you test negative again).

Here's a rundown of how the tests work, how reliable the results are, who makes them, where to find them and how much they cost.

What are at-home rapid COVID tests?

The key word here is "rapid," as in delivering results in about 15 minutes. Unlike the self-testing kits that you have to send to a lab for processing, the rapid kits let you process your samples at home — in fact, most of them let you watch the results slowly emerge on a test strip, the way you might watch an image form on a Polaroid (but with higher stakes).

The U.S. Food and Drug Administration has given emergency-use authorization to two kinds of rapid tests: molecular and antigen. The molecular tests, which boast higher sensitivity but carry a higher cost, examine the genetic material in your sample for the presence of the SARS-CoV-2 virus. The antigen tests look for the presence of a protein that binds to the coronavirus' RNA.

Only one of the three approved home molecular tests — the Lucira CHECK-IT kit — is easily found online, and it's pricy: Amazon sells it for $89 per test.

A quick search for antigen tests, on the other hand, found six of the nine approved tests available to U.S. consumers in stores or online, one from two different manufacturers:

— BinaxNow — about $24 for a two-pack at local pharmacies.

One other antigen test, by Celltrion, is available in bulk quantities from medical supply stores online for about $10 per test.

Different antigen test kits come with different features — for example, some have smartphone apps that can display your test result, which would be useful if you're asked to show proof of a negative test. And the performance of the tests may vary, although all did well enough to win the FDA's emergency authorization.

Dr. Ashish K. Jha, dean of the Brown University School of Public Health, said the BinaxNow test has been the most widely used, so it has more of a track record than the other tests. But he said people shouldn't pay too much attention to brand names, given that the tests have been in relatively short supply. "Any of the tests that you can find are way better than not having tests," he said.

How reliable are the results?

The coronavirus that causes the COVID-19 disease can take several days to build up steam (or "viral load"), which means you aren't likely to show symptoms or be infectious to others immediately after you've caught it. That's why public health officials advise you not to get tested immediately after you've been exposed to people who might be infectious.

Molecular tests, however, use chemical techniques to amplify the amount of genetic material in a sample, enabling them to detect the presence of the coronavirus at a very early stage — in some cases, even before a person can pass along the infection to others. On the other hand, they may also find leftover traces of the virus after a person is no longer contagious. And like any test, they are subject to contamination and other glitches that can cause erroneous results, including the occasional false positive. It's not common, but it's more likely to happen in communities that have few cases of the disease.

Antigen tests have proven to be as good as molecular tests at avoiding false positive results. And according to the CDC, these tests are also just as good when it comes to detecting COVID in someone who is showing symptoms of the disease, such as a cough, a fever and a sore throat.

Where the tests fall short, the CDC warns, is with people who have the virus but show no symptoms, especially if they're in the early stages of infection and may not yet have enough of a viral load to infect others. The agency recommends that people perform a second antigen test a few days after the first one, which is why the kits are sold as two-packs.

If you haven't been vaccinated and you've come into close contact sometime in the previous two weeks with someone who had COVID, the CDC recommends that you get a molecular test just to be sure you're not infected.

What's the best use of rapid tests?

Testing can reduce the risk in a variety of holiday scenarios, but Jha and Dr. Robert Wachter, chair of the department of medicine at UC San Francisco School of Medicine, said it makes the most sense in two situations: if unvaccinated people will be joining you for the holidays, or if people in your group would be at high risk of deadly complications if they contracted a breakthrough case of COVID-19. "Other than that, while it could render a gathering a smidgen safer, it doesn't feel worth it to me to spend a few hundred bucks testing 10 or so people," Wachter said in an email.

Another factor weighing in favor of testing is when there is a high rate of COVID infections in the community, Jha said. But which community determines the amount of risk? That may be hard to figure out if you have guests coming from several parts of the country.

When and how often you should take a test depends on the nature of the gathering. "Rapid tests are a measure of contagiousness," Jha said, "and so you want to test as close as you can of getting together with people." If it's just a Thanksgiving day meal, Jha said, "The ideal situation would be to test on Thursday morning."

But if it's a holiday weekend visit, he and Wachter suggested testing more than once — say, just before arriving and again in a day or two — especially if you'll be in the presence of unvaccinated people. "Two negative tests, you're really good to go," Jha said, adding that if you're around people at high risk of COVID complications, you could even take a test daily.

"In an unvaccinated population, one single test is probably not good enough," Jha said. For proof, he pointed to the ceremony President Trump held last year for new Supreme Court Justice Amy Coney Barrett. Attendees had to have gotten a negative test result to gain admission but it still turned into something close to a superspreader event.

How do you test yourself?

The typical process starts with taking a sterile swab from the kit and tracing the inside of each nostril several times. That gathers the sample. The next step depends on the type of test.

With molecular tests, the swab is inserted into a small container, where the sample is mixed with a reagent, a substance that starts the process of revealing the sample's genetic makeup. The container is then placed in a base unit, where the magic (technically, the isothermal amplification) happens. The results appear on the base unit or in a smartphone app.

With antigen tests, the swab is placed in a disposable reader (often made of paper) where it meets a test strip. You add a few drops of the kit's reagent, then watch to see whether the strip shows a positive, negative or inconclusive result.

Be sure to read and follow the instructions carefully to collect a proper sample and avoid contamination. With the popular BinaxNow test, for example, you're supposed to swab each of your nostrils for 15 seconds and rotate the swab three times after placing it in the reagent.

As the U.S. nears a national peak in the surge of the omicron variant, many states are already seeing a decline in COVID-19 cases. Mayo Clinic's Predictive Analytics Task Force has been tracking COVID-19 cases in the U.S. ...Read More

January is Cervical Health Awareness Month, which makes this a good time to learn about cervical cancer risk factors.

For three years, Rachel Makkar said, she thrived in her job as a broker and asset manager at J&B Building Co. in Colorado. She excelled at her work — she said her performance reviews noted that — and she thought it was...Read More

DEAR MAYO CLINIC: My child moves around a lot at bedtime and has trouble falling asleep. She describes "bugs" on her legs. As someone who was diagnosed with restless legs syndrome, I am wondering if children can develop ...Read More

AUSTIN, Texas -- Doctors at UT Health Austin have been trying to solve the puzzle of why some COVID-19 patients remain sick for months or now years.

Since last July, people who have what some call long COVID or long-...Read More

PHILADELPHIA — The coming weeks should bring a new phase in the pandemic, as policy shifts and a supply of up to a billion free, government-issued rapid test kits for home use promise to make diagnosing COVID-19 at home ...Read More