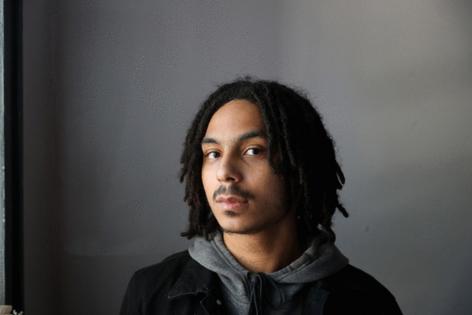 “Like you can just be standing on the bus stop waiting for the bus and the police officer will come up. Like once I experienced that, I was sitting at the bus stop waiting to catch the bus to school, a police officer starts asking me all these questions like, ‘Have you seen this person?’ Or, ‘Have you seen anybody selling drugs?’ And I’m like, ‘Dude, I’m just standing on the bus stop, I don’t, I don’t know anybody over here.’”

“And, we’re saying at that same time, we’re feeling restricted because if we act in a way that we want to react — number one, we’re going to jail; number two, it’s just going to feed into the stereotype that they think we’re supposed to be violent or whatever.”

“These experiences are often normalized by the youth that are experiencing it every single day,” Jindal said. “There’s one quote where a kid is like: ‘I feel this way, they say I’m depressed. I’m not depressed.’ That denial of something really going on because it’s your everyday life and you don’t see it as depression? I think there’s a lot of precursors to depression and anxiety, and just because someone hasn’t been diagnosed with that doesn’t mean that the symptoms that they’re having are not necessarily leading to that.”

Jindal, whose research focuses on how racism impacts health and health care delivery, is hoping that work like hers leads to next steps with policymakers and legislators working together to change systems and create interventions for youth of color that policing impacts.

“This is data supporting that this is problematic and it can have long-term effects on the development of a child into their adulthood,” she said. “We’re doing this, trying to use this data to convince some of the naysayers that this is something we really need to focus on. I think there is a whole body of research that needs to be done ... we do really need to find ways as scientists to start speaking the same language about it so that work can be compared and synthesized together.”

Jindal said the importance of including youth in the problem-solving is key as well. Ideas from the youth who are affected by police, and centering data and science around youth solutions to the problem, are vital.

“What do they think would make communities safer? And improve their well-being?” Jindal said.

Both are questions that Watts is asking as a youth leader of Communities United, a survivor-led, grassroots, intergenerational, racial justice organization in Chicago. In his role with the organization, Watts, a senior at Stephen Tyng Mather High School, is helping develop a holistic mental health plan for youth, and community healing. Watts said Communities United is a place where youth can talk about their experiences, traumatic or otherwise, because not everyone has a place where they can go to do that.

“We talk about what mental health resources we can put inside the communities or inside the schools,” he said. “Society, as a whole, assumes that youth already has a go-to for this, but not many youth even have family to go to. They’re stuck dealing with the stuff they go through on their own. And that’s what kind of messes them up like, not only in society, but in their education systems.

“For me when I got stopped, it put a different viewpoint on how police work. It makes you uncomfortable with seeing police in the world. And since they were in school, it made me uncomfortable seeing them in school because they would give me a certain look and I’d be like: What am I doing wrong? It makes you think like you’re always doing something wrong at that point.”

Watts has already selected his early action colleges, primed to give back to his community as a therapist or psychologist to help the next generation. Until then, he’s busy reassuring friends who have police encounters what he wanted to hear after his experience: ‘You’re not in the wrong. Keep doing what you’re doing. You’re never doing anything wrong. So don’t feel like you are.’

“I don’t ever want them to feel alone. If they’re alone that’s gonna build up their fear,” Watts said. “That’s what needs to happen with Black youth. We need that reassurance that we’re not doing anything wrong. I want to be comfortable in the community that I live in, but unfortunately, we can’t be because these are the things they (police) put us through.”

“I feel like there’s always going to be fear because that’s how we still live. We can’t really show much confidence or be bold, because us being bold is what makes them fear. And then if they’re in fear then that’s the end of our lives. It’s like, we have to show fear in order to get out of certain situations with the police,” Watts said.

Jindal, who has been teaching a curriculum on racial bias for residents in Ohio and Maryland for the past five years, said the end goal of the work is to convince people that policing needs to be considered a critical determinant of health.

“If we can first agree on that, then we can build the body of research that is actually looking at interventions and determine what is most useful,” Jindal said. “Hopefully, seeing this and seeing that there is a body of work around this, we can get funders to take proposals that are going the next step to look at interventions, seriously.”

Jindal welcomes discussion with law enforcement about the research.

“I think it’s something that we all have to do … to be really critically self-conscious and to exercise some humility in this. There are a lot of beliefs and behaviors that we all have, that we have to be willing to interrogate. It’s problematic for law enforcement to think that they’re being singled out. I think the reality is that they wield a lot of power. And when they make a racially biased mistake, that’s life or death. That is the case for physicians as well — maybe not as quickly. But I think health care is trying to look at how we are perpetuating racism ... how we’re part of the problem. I’d say to law enforcement, we’re doing it and we’re asking that you to do it too.”