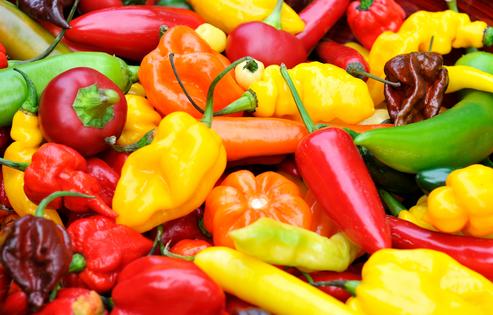 If you’ve spent any time traveling around the globe, your burning lips are a testament that chili peppers have become a fixture of so many different cuisines. A papaya salad from a Thailand food market or a fragrant curry dished out by a roadside restaurant in southern India wouldn’t be the same without their fiery kick. Street tacos in Mexico would be too tame if they didn’t induce a few drops of sweat.

Chili peppers — from jalapeños to volcano-like habaneros — will not only dial up the excitement of nearly any dish they touch, they can also turn up the heat on your health. Dare we say that research suggests hot peppers may literally be the “spice of life” by improving longevity.

A recent investigation from the American Heart Association found that people who regularly eat chili peppers are 26% less likely to die of heart disease and had a 23% lower chance of dying of cancer than everyone else. This was echoed by a report in the journal PLOS ONE using data from the National Health and Nutritional Examination Survey that discovered U.S. adults who ate the most chili peppers had a 13 percent lower risk for premature mortality from maladies like cardiovascular disease than those who ate none.

While these studies cannot prove cause and effect, nor did they nail down how many or which chili peppers lower the risk the most, it’s believed that capsaicin — the naturally occurring compound that gives chilies their fiery kick — can help improve health measures by potentially reducing inflammation in the body. Capsaicin has antimicrobial activities that may also help bolster lifespan.

A study in the journal Hypertension discovered that people who ate more chili-laced cuisine typically preferred less salty foods and consumed less salt overall, which could have benefits for blood pressure control.

Spicy foods might trick the brain into thinking food is saltier than it actually is. A sriracha habit may also help people better manage their body weight, as it’s been shown that exposure to capsaicin can raise one’s metabolic rate and also rein in appetite, which may trim overall calorie intake. That said, the impact peppers have on body composition is likely minor compared to healthy eating in general and regular exercise.

Capsaicin content of peppers is measured in Scoville heat units (SHU). The higher the number, the more perspiration it may induce. If you are easing into the world of chili peppers, it can be a good idea to start with peppers that rank on the lower end of the SHU scale and then work up from there. And start looking for ways to work more peppers into your diet, including soups, curries, salsas, and sauces.

The same wastewater surveillance techniques that have emerged as a critical tool in early detection of COVID-19 outbreaks are being adapted for use in monitoring the startling spread of monkeypox across the San Francisco ...Read More

The W-Curve Model was first proposed in 1963 to explain adjustment to culture shock. Starting college is a culture shock for many young people. It is often the first time students are away from home for an extended period....Read More

The pandemic exacerbated many mental health problems, and eating disorders are no exception: Emergency room visits for girls suffering from anorexia and bulimia were twice as high in January of this year as they were three...Read More

Often labeled a superfood, blueberries are bursting with vitamins and minerals ─ many of which are classified as antioxidants. Much of the power of this little berry lies in its color.

DARLINGTON, South Carolina — Just off the deserted town square, with its many boarded-up businesses, people lined up at the walk-up pharmacy window at Genesis Health Care, a federally funded clinic.

ROSAMOND, Calif. — Deborah Lewis rose from bed before dawn and signed in to her phone so she could begin delivering fast food, coffee, and groceries to residents in this western patch of the Mojave Desert where test ...Read More