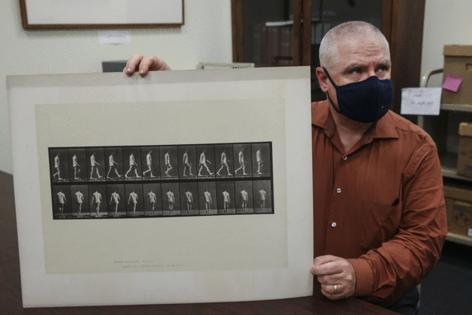 PHILADELPHIA — He swayed slightly from side to side, his bare feet slapping the ground with each step. Identified only as Rogers, the lanky young man was one of nine neurological patients in a series of sepia-toned "electro-photographs," captured with novel stop-motion technology in Philadelphia in the summer of 1885.

The photographer was Eadweard Muybridge, better known for using his technique to record the movements of galloping horses. His famous images settled a vigorous debate of the Victorian era: whether the animals, at any point in their stride, lift all four hooves off the ground. (They do.)

Yet Rogers and the other medical patients in the photos have long been a mystery. Historians knew the images had allowed physicians to make precise measurements of irregular movements caused by disorders of the brain and spinal cord. But what caused the patients' symptoms? How were they treated? Who were they?

Geoffrey Noble, a neurologist who spent months combing through yellowing archives at the University of Pennsylvania, has now cracked the case. Working from limited details in an index that accompanied the photos, he matched them with comprehensive, handwritten medical records for each of the nine patients — revealing their diagnoses, the medicines they took, even where they lived and worked.

The clinical histories provide a rich illustration of an era when physicians were just starting to use technology to unlock the secrets of the human brain, said Noble, who did the research while he was a neurology resident at Penn's Perelman School of Medicine.

Scientists had begun using microscopes to study brains from autopsies, discovering the structure of neurons and how they were connected. And Muybridge's cameras offered a more precise way to characterize neurological disorders in those who were still living — foreshadowing the MRIs and other high-tech equipment that would come a century later.

The patients were photographed walking in front of a grid of white strings, hung at the back of a three-sided wooden studio near 36th and Pine Streets. The grid appeared in the photos like a big sheet of graph paper, allowing Muybridge's collaborator, Penn physician Francis X. Dercum, to measure the motion of their arms and legs.

Before then, neurologists had only their eyes and ears.

"These doctors had no tests at that time beyond their talking to the patients and examining their patients," said Noble, now a fellow in neuromuscular medicine at Brigham and Women's Hospital and Massachusetts General Hospital.

Noble did not set out to solve the riddle of the photos. His initial goal was more general: to study the early history of his field. Penn neurology professor Geoffrey Aguirre told Noble about the clinic records, which had been rediscovered after a recent renovation, and in November 2020, he started to read.

The 20 volumes came from the outpatient clinic of which Dercum was chief: the Dispensary for Nervous Diseases at the Hospital of the University of Pennsylvania. The entries span a period of 12 years, starting in 1878, just three years after the hospital was founded.

As Noble began to pore over the fading pages, Penn archivist J.M. Duffin told him the university had copies of Muybridge's photos from the same era. Perhaps some of the subjects were described in the notebooks?

Sure enough, Noble was able to find records for all nine, which he described in September's issue of the journal Neurology.

"You feel like the patient is coming out of the page at you, 150 years later," he said.

Rogers, he learned, was H.V. Rogers: an Iowa-born clerk who came to the clinic on 20 occasions over the course of six years. He gave his address as 18 N. Fifth St., in what is now part of the lawn at Independence Mall.

At his first visit, in October 1883, at age 32, Rogers reported suffering from headaches, indigestion, and constipation. Physicians diagnosed him with "general nervousness," attributing it to overwork.

On another visit in 1885, he complained of a constricted abdomen and pain in his calves, and was found to have an "ataxic" (unbalanced) gait, which Dercum attributed to a lingering syphilis infection from a decade earlier. At that appointment, Rogers agreed to walk in front of Muybridge's battery of 12 cameras, each one triggered by an electrical mechanism of the photographer's design.

From the side, the images show him lifting his feet higher than normal and landing with a slight "slap," Noble said. A second set of images, shot from behind, reveals that Rogers swayed with each step and had a wide stance.

Noble said it was impossible to confirm the diagnosis of syphilis, but he agreed that the patient's movements were consistent with such an infection — which, in an era with no antibiotics, could spread to the spinal cord and brain.

Among the other patients that Noble matched to the photos were a 24-year-old laborer who had fallen into a pit, landing on his head; a 41-year-old homemaker who walked stiffly and experienced jerking movements of the head and torso, attributed to inflammation of the spinal cord; and a 26-year-old "domestic" with a spastic gait, cramps, and numbness, blamed on "hysteria."

Women often were saddled with that vague, unhelpful diagnosis in the Victorian era, and it's hard to say the true source of the young woman's complaints. But for one of the other patients, a 64-year-old schoolteacher then diagnosed with Parkinsonism, Noble thinks he can set the record straight. From looking at the man's signature and his family history in the notebooks, Noble says that, instead, it is more likely he had a condition called essential tremor.

Many of the treatments prescribed for the patients are now known to be ineffective. In the case of Rogers, physicians administered two that are toxic: strychnine and mercury.

"We see over time that he's getting worse," Noble said. "They're trying to treat him, and it's not working."

Over the years, Rogers also began to experience problems with his eyes. The Penn physicians found that his right optic nerve had atrophied, the retina was irritated, and the right pupil did not contract as much as the left.

After that, the trail goes cold. But a man with the same name, age, and Iowa birthplace can be found in U.S. Census records, living until age 71. That was a fairly advanced age for the time, especially for someone with syphilis, but it is likely the same H.V. Rogers, he said.

"The age of death is a little surprising," Noble said. "But these indolent, chronic infections can burn out over time. I think this is entirely within the realm of possibility."

Muybridge, the photographer, remained best known for his images of horses. He enlisted an artist to copy them onto a glass disk, which he then projected onto a screen with a device he called the zoopraxiscope. When viewed in rapid succession, the images showed the horse in motion — an early forerunner of a movie.

The medical patients, on the other hand, were mostly an enigma, though historians tried over the years to glean clues from studies that Dercum published at the time.

The patient notebooks were rediscovered at the hospital in 2017 and transferred to university archives, where Duffin's colleague, J.J. Ahern, ensured their safe storage for posterity. The archivists, aware that medical records from the era were a rare find, were intrigued.

"I knew they were a goldmine," Duffin said.

What they needed was Noble, someone with medical training and a keen appreciation for the past, to extract the nuggets of history from within.