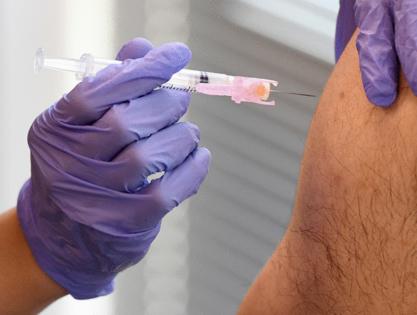 Do we really need to say this?

The latest off-the-wall claim from the anti-vaccine crowd involves an enzyme called luciferase, from the Latin word "lucifer" — bearing light.

Yes, that's also the source of the name for the fallen angel in Latin translations of the Bible.

But no — a thousand times no — there is no luciferase, much less anything devilish, in the COVID-19 vaccines.

This misinformation seems to have emerged months ago, and it was given new life this week in a tweet from a correspondent for the conservative site Newsmax. Twitter quickly suspended the writer's account, according to the Daily Beast.

But like much misinformation, it did not spring up from nowhere.

Luciferase occurs naturally in fireflies, causing them to glow by breaking down a compound called luciferin. This phenomenon was adapted by scientists long ago for use as a genetic "reporter" — a powerful laboratory technique. In the case of the COVID vaccine made by Pfizer-BioNTech, it was used in laboratory tests of the lipid nanoparticles used to deliver messenger RNA inside cells. Luciferase was "expressed" in lab animals to make sure the nanoparticles would end up in the right place.

There is no luciferase in the actual vaccines. Among the many scientists who pointed this out on social media was Angela Rasmussen, a virologist at VIDO-InterVac, a research organization based at the University of Saskatchewan.

"I can't address all concerns about vaccines, but I can address nonsense about luciferase being the devil's preferred reporter (which again is not actually a vaccine ingredient)," she tweeted.

Others resorted to humor in dismissing the bizarre claim.

If the original tweeter was concerned that a glowing protein from fireflies was being used for nefarious purposes, she might look elsewhere in the animal kingdom, said Jason Kindrachuk, a scientist who studies the biology of infectious diseases at the University of Manitoba.

In a post Tuesday, he wrote: "Wait until she hears about those pesky jellyfish and their dark arts."

With the pharmaceutical company Merck applying in October for emergency authorization of its antiviral pill treatment against COVID-19, North Carolina and the rest of the country soon may see its first widely accessible ...Read More

WASHINGTON — Antiperspirant and deodorant body sprays have been found to contain elevated levels of the carcinogen benzene and should be recalled, an independent testing lab said in a petition filed with the U.S. Food ...Read More

LOS ANGELES -- You've scarcely finished your Halloween candy and pan de muerto and are just starting to contemplate this year's holiday decor. Unfortunately, the grimmest of all annual holidays is upon us: the end of ...Read More

November is Pancreatic Cancer Awareness Month, which makes this a good time to learn more about the risk factors for pancreatic cancer and what you can do to keep yourself safe.