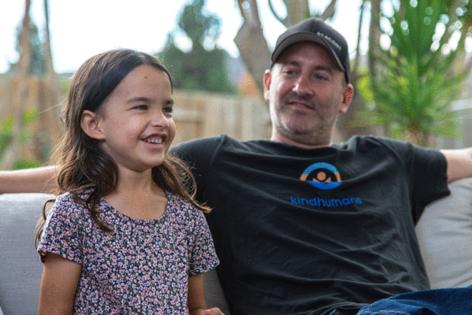 It was a very real worry for Shawn and Mariel Mahoney, whose 6-year-old daughter, Layla, received a very difficult diagnosis this summer at a time when no coronavirus vaccines have yet been approved for anyone younger than age 12.

Selected over the summer to be among 60 local kids to participate in an ongoing clinical trial of the Moderna vaccine in kids ages 6 to 11, the first-grader nearly missed out.

As her father explained on a recent afternoon, a confirmed cancer diagnosis would have been reason enough for his daughter to have been denied entry into the trial. But, when the first vaccination appointment arrived on Aug. 20, the diagnosis still had not been confirmed. St. Jude’s Children’s Research Hospital in Tennessee had not yet verified an initial diagnosis from Rady Children’s Hospital in San Diego.

Doctors went ahead and pushed the plunger on that first shot, only for Shawn Mahoney to receive a call from a St. Jude’s specialist 10 minutes into the ride home.

“She was supposed to call me an hour earlier but something delayed her,” Mahoney said. “It was just made to be.”

Layla did not have much reaction to that first dose, and her parents worried that she might have been among the 25 percent of trial participants assigned saline injections, making her part of the placebo group rather than among the 75 percent who receive the vaccine.

But a second shot several weeks later left them celebrating a daughter who suddenly became exhausted and started running a fever.

Those are the well-known minor side effects, they well knew, of a person’s immune system reacting to a vaccine.

“She was like, ‘it’s really cold in here,’ and I was like ‘yes!’” Mahoney said. “Terrible parents, so happy to have our kid have a low-grade fever.”