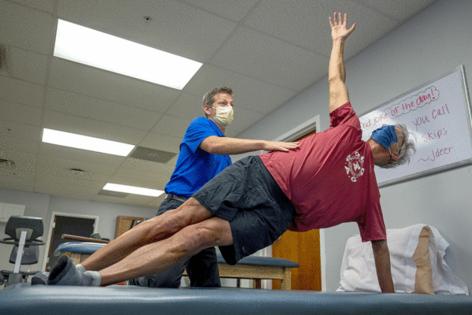 PHILADELPHIA — Anyone who has been near a gym in the last decade has heard the buzz about strengthening “the core” — muscles in the trunk and abdomen that can be targeted with crunches, planks, and other gut-busting exertions.

Yet for all the attention devoted to this crossroads of the human body, it remains a common site of injury for amateur and professional athletes alike.

Physical therapists Brian Catania and Travis Ross think many athletes are missing a key part of the picture: rotation.

That’s because the core includes wide swaths of muscle that stretch diagonally across the body, from the thigh on one side to the ribs on the other, say the duo, who work at ChristianaCare Rehabilitation Services in Newark, Del. Straight-line planks and sit-ups are fine, but those exercises may not engage a series of smaller muscles that connect the core’s opposite ends, leaving the body vulnerable to injury when it twists or changes direction.

That idea is not new, but Catania and Ross have developed a novel, six-step screening technique to tell whether these connectors are weak or inactive. They also have designed seven targeted exercises to correct any deficiencies, described in the May issue of the Journal of Sport Rehabilitation.

Others in the field think the Delaware pair are on to something. Trainers from two teams in the National Football League — the Los Angeles Rams and the Baltimore Ravens — met with Catania and Ross for hands-on instruction after they spoke at a league symposium this year, and the Rams have now incorporated the strategy into their official regimen.

And surgeon William C. Meyers, a prominent core-injury specialist at the Vincera Institute in Philadelphia’s Navy Yard, gave the concept a thumbs-up.

“Those are great exercises,” he said, after seeing a description in the study. “They’re really working on the rotational muscles as much as anything. And they’re working on muscles as a group.”

Future study will examine how much the approach reduces the risk of injury. But so far, evidence suggests that it helps, and not just in the abdomen and trunk.

The University of Delaware men’s lacrosse team reported fewer hip and hamstring injuries after adopting an early version of the Catania-Ross program several years ago.