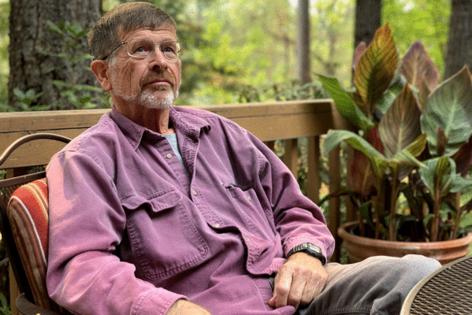 It’s a bad time to get sick in Oregon. That’s the message from some doctors, as hospitals fill up with COVID-19 patients and other medical conditions go untreated.

Charlie Callagan looked perfectly healthy sitting outside recently on his deck in the smoky summer air in the small Rogue Valley town of Merlin, in southern Oregon. But Callagan, 72, has a condition called multiple myeloma, a blood cancer of the bone marrow.

“It affects the immune system; it affects the bones,” he said. “I had a PET scan that described my bones as looking ‘kind of Swiss cheese-like.’”

Callagan is a retired National Park Service ranger. Fifty years ago, he served in Vietnam. This spring, doctors identified his cancer as one of those linked to exposure to Agent Orange, the defoliant used during the war.

“It turns out the airbase I was in was surrounded,” he said. “They sprayed all over.”

A few weeks ago, Callagan was driving the nearly four-hour trek to Oregon Health & Science University in Portland for a bone marrow transplant, a major procedure that would have required him to stay in the hospital for a week and remain in the Portland area for tests for an additional two weeks. On the way, he got a call from his doctor.

“They’re like, ‘We were told this morning that we have to cancel the surgeries we had planned,’” he said.

Callagan’s surgery was canceled because the hospital was full. That’s the story at many hospitals in Oregon and in other states where they’ve been flooded with COVID patients.

OHSU spokesperson Erik Robinson said the hospital, which is the state’s only public academic medical center and serves patients from across the region, has had to postpone numerous surgeries and procedures in the wake of the delta surge of the pandemic. “Surgical postponements initially impacted patients who needed an overnight hospital stay, but more recently has impacted all outpatient surgeries and procedures,” Robinson wrote.

WASHINGTON — For most of her adult life, Amy Bielawski has gone without health insurance.

Her small Atlanta-area business, which provides entertainment for parties and events, didn't bring in enough revenue to afford ...Read More

It was a very real worry for Shawn and Mariel Mahoney, whose 6-year-old daughter, Layla, ...Read More

It’s no secret the U.S. depends on processed, packaged foods; they are convenient and affordable.

But these foods are also the source of 70% of sodium in Americans’ diets, the majority of which comes from salt added ...Read More

When he arrived at the rehab facility in North Kansas City, Missouri, they sent...Read More

DEAR MAYO CLINIC: As I have gotten older, doctors have placed me on more medications, such as for blood pressure and cholesterol. Also, as I age, I have chosen to take some supplements that are supposed to improve my ...Read More

Q: I've heard some theories circulating about the COVID-19 vaccine, including that it was developed to control the general population through microchip tracking or "nanotransducers" in our brains. I've also heard that it ...Read More