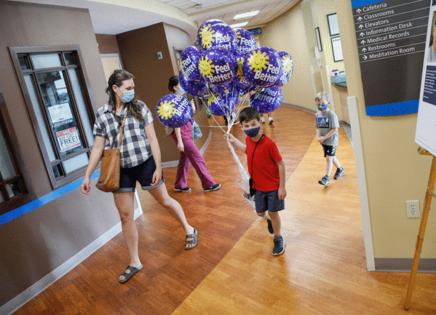 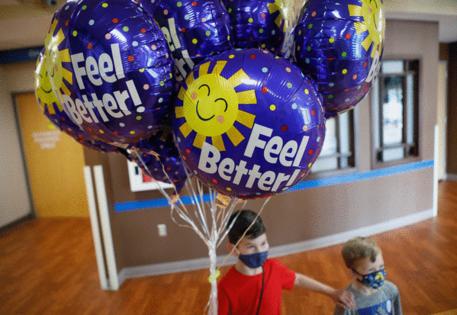 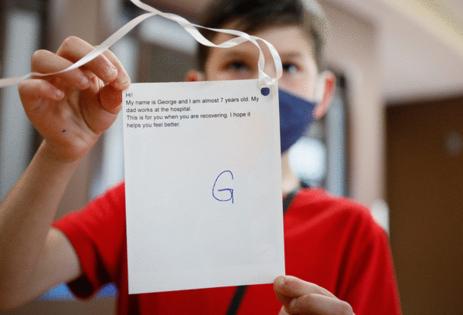 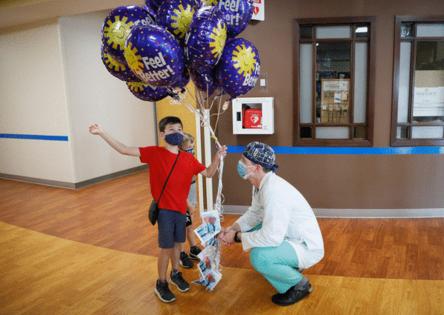 "Feel better," read the blue balloon with a smiley-faced yellow sun on it.

The card was from Raney's son George. On one side was a painting of a heart and flowers, and on the other was a printed note:

"Hi! My name is George and I am almost 7 years old. My dad works at the hospital. This is for when you are recovering. I hope it helps you feel better."

Allman, 86, said her grandchildren had sent her a balloon, as well, but this gift from a stranger was a sweet surprise.

"I just loved it," said the West Side resident. "It makes you feel good, God love him. Kids are amazing."

His parents, Far West Side residents Aaron (a resident surgeon) and Lena, say George is pretty amazing, as evidenced by the plan he hatched to raise money, buy balloons and have them delivered to hospital patients.

"It was 100% percent George's idea," said Aaron. "He has a tender heart and is very giving. He has a soft spot for people who are hurting."

Added Lena: "He gets that from his dad."

The idea started last winter. George wanted to do a lemonade stand.

"And then I thought it would be a good idea if I used the money to buy balloons for the patients," he said.

Asked why, he said it was because his dad was a doctor, and George and his younger brother Theodore, 4, always ask Dad about his day when he comes home at night.

"I like to know what surgeries he did, and he usually almost always says gall bladders," George said.

The family had a lemonade stand on two afternoons in August, and George said he raised $124.

Lena helped George create his card, printing out photos of his note and painting. They went to Dollar Tree and bought the first 20 balloons several weeks ago, and then the second batch of 20 on Monday.

Because of COVID-19 protocols, George can't deliver them to patients himself, so he, Lena and Theodore bring them to the hospital lobby and Aaron takes it from there.

George, a home-schooled first-grader who turned 7 last Sunday, said he has money to buy about 70 more balloons, and he is thinking about having an apple-cider stand this fall.

Asked what he planned to do with the cider-stand money, he gave his questioner a funny look and answered emphatically: "The same thing. Every single time."

We’ve all heard the term “clean eating,” and how it’s supposed to give us picture-perfect health. For good health, there is obviously nothing wrong with striving to eat mostly lesser processed foods and cooking ...Read More