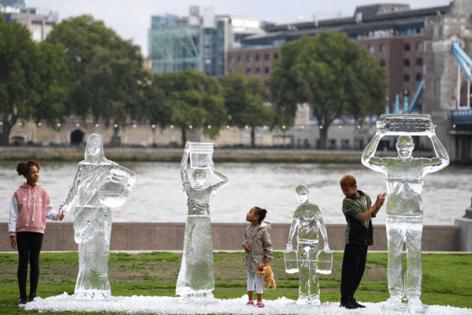 One evening in July, Stephanie Felts was lying in bed trying to process simultaneous climate disasters all over the world. From a crushing Canadian heatwave to U.S. wildfires and China floods, the drumbeat triggered memories of a close call her family had with a raging inferno when they lived in Salt Lake City a few years ago.

“I just realized, OK, this is as good as it will ever be — not because we can’t do anything to make things better, but because we just won’t,” said Felts, 43, who works in financial services and now lives near Atlanta. “It makes you feel like, ‘hey, the apocalypse is starting.’”

She’s not alone. More people are finding it hard to cope with a growing sense that governments and businesses won’t do enough to slow global warming. To make matters worse, there’s the knowledge that even if humanity suddenly unified in a historic shift to renewable energy, it’s too late to avoid the grim consequences already baked in.

Perhaps not since the depths of the Cold War has such a profound, widespread despair for the future emerged. Whether one calls it climate anxiety, ecological grief or something else, deep concern about global warming is increasingly affecting many people’s everyday life. A majority of U.S. adults already say they are somewhat or extremely anxious about the effect the climate crisis has on their mental health, a poll from the American Psychiatric Association found. That’s on top of the stress of trying to protect against the coronavirus.

But while the pandemic may recede in the coming months or years, the atmospheric changes wrought by burning fossil fuels will remain for a long time to come. As this reality dawns on more people, mental health professionals all over the world find themselves racing to develop strategies to help them deal with the fallout, knowing it’s a phenomenon that may someday affect almost everyone.

In the developing world, millions have been dealing with the psychological effects of global warming for years. Rising temperatures in Nigeria are contributing to desertification, forcing herders in the north to move south to feed their cattle. The shift has precipitated confrontations with crop farmers. Fear of violence over increasingly scarce resources is not uncommon.

Last October, Amuche Nnabueze’s relatives learned that a stand of trees planted by her uncles had been cut down in a property dispute. “Now that you’ve cut the trees down, the animals that were living there are homeless,” said Nnabueze, 50, a lecturer at the University of Nigeria in Nsukka. “The oxygen [the trees] were generating is no longer there.”

The conflict is emblematic of how, thanks to climate change, large swaths of the African Sahel and savanna are expected to become the front lines of a competition for resources.

Mariana Menezes said she celebrated when the Paris Agreement was signed. Living near Porto Alegre in southern Brazil, Menezes said she “felt like we were going to manage to solve everything.” But in 2017, when U.S. President Donald Trump announced he was going to withdraw from the pact, she was crestfallen. “I feel like I was naïve, and sort of ill-informed,” Menezes said. “I started getting really worried, thinking, ‘oh no, we’re not going to make it.’”

She started reading more about the crisis. The more she learned, the worse it got. “I became very anxious. I couldn’t sleep,” said Menezes, 44, a mother of three. “I was thinking about my children.”

We’ve all heard the term “clean eating,” and how it’s supposed to give us picture-perfect health. For good health, there is obviously nothing wrong with striving to eat mostly lesser processed foods and cooking ...Read More