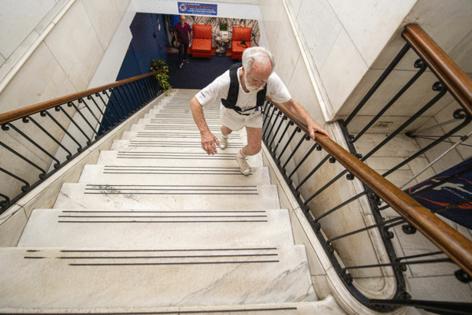 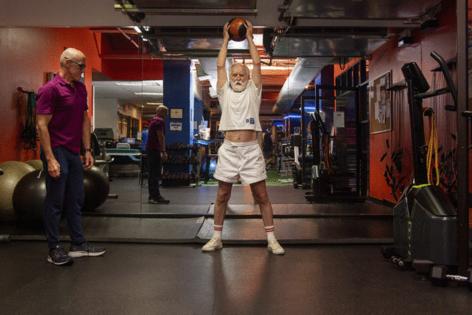 After that little warm-up, personal trainer Jim Hart, who specializes in working with older adults, led Pallett through an hour of exercises meant to improve strength, balance, power and metabolic health. The semi-retired lawyer gamely worked his abs while perched precariously on a 72-cm ball. Hart combined such movements as punches and lunges so that Pallett was using his arms, abs and legs all at once. That required the kind of whole-body coordination needed to avoid falls or do physically demanding work at home.

They finished at Optimal Sport 1315 in Center City with some upper-body work on weight machines set at about 45 pounds.

Pallett, a trim man with a white beard and silver hair, has increased the weights he’s using by about 30% since he began these workouts. Hart thinks his client is still in the “beginning stages of his potential.” It will likely be at least eight more months before Pallett plateaus.

Could he catch up to similar men who have exercised their entire lives?

Hart, 61, thinks that is sometimes possible if older exercisers work hard enough and have the right genes, but most experts say people who put off exercising until their retirement years are at a disadvantage. They enter late life — a time when strong muscles and good aerobic capacity can make the difference between independence and disability — with poorer-quality blood vessels, nerves and muscles than peers who have always been fit. New exercisers can repair much of the damage, but, probably, not all of it.

“We can’t undo 20 years of terrible living,” said Dan Ritchie, co-founder and president of the Functional Aging Institute, where Hart trained to work with elders.

The good news is that you don’t have to catch up to the lifelong runners and gym rats to improve your health and quality of life. “You can take really unfit people at 70,” Ritchie said, “and get them really fit and doing amazing things.” One client started working with him at 78. Now in her late 80s, she can leg press her own body weight, and use 5- to 10-pound dumbbells.

Pallett jokes about looking like Arnold Schwarzenegger and besting his very strong 30-year-old son at arm wrestling. He would like to live longer than his mother, who made it to 97, and avoid the dementia that took his father in his early 80s. For now, he’s happy that his posture is improving and that his shirts fit tighter across the chest as he’s gained muscle.

A man who came late to fatherhood and loved it, Pallett listened when his son encouraged him to exercise. “I told him I could beat him,” Pallett said. “I know I’ll never beat him. I’m too old, and he’s too young. He wanted me to get healthy because he didn’t want me to die.”