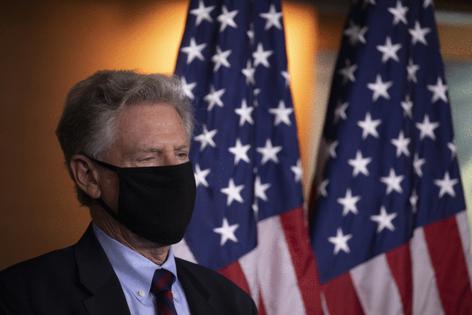 WASHINGTON — Democrats are sharply divided over whether to require drugmakers to negotiate prices with the federal government, a rift threatening key parts of President Joe Biden's $3.5-trillion social safety net bill — including the possible expansion of Medicare or Obamacare — and one that could put the entire effort at risk.

Three House Democrats on Wednesday blocked the House Energy and Commerce Committee from advancing a provision to allow drug-pricing negotiation in favor of an alternative that other Democrats say is far weaker.

Given the slim majority Democrats have in the House, if they remain opposed, they would be just one vote away from being able to block the entire effort on the House floor, assuming all Republicans remain opposed, as expected.

The intraparty disputes underscore the sharp policy differences Democrats are trying to overcome as they try to pass Biden's Build Back Better plan, which aims to enact a series of social benefits, such as universal pre-kindergarten, childcare tax credits and elder care.

The prescription drug policy is key to the rest of Democrats' plans because it would bring in an estimated $700 billion that would be used to shore up other parts of the health care system, such as Medicare and the 2010 Affordable Care Act, often called Obamacare.

Rep. Scott Peters, D-Calif., is leading the opposition to Democrats' existing plan, arguing that it would decimate investment in the pharmaceutical industry and threaten jobs, including about 27,000 in San Diego.

"The promise we made was to lower drug prices, to negotiate with drug manufacturers," Peters said of Democrats' decade-long pledge to voters. "We did not promise to kill the goose that lays the golden egg."

Peters, as well as Reps. Kurt Schrader, D-Ore., and Kathleen Rice , D-N.Y., the three Democrats who oppose the prescription drug plan, have drawn the ire of fellow Democrats, progressives and advocacy groups, who for years have been fighting to lower drug prices.

Peters and Schrader's alternative would allow negotiation on only a fraction of all prescription drugs, unlike the broader plan in the existing proposal.

It would also enact a yearly out-of-pocket cap for Medicare enrollees who make a modest income and caps out-of-pocket insulin costs. Peters estimates that his bill would bring in $200 billion, far less than the $700 billion in savings in the existing plan.