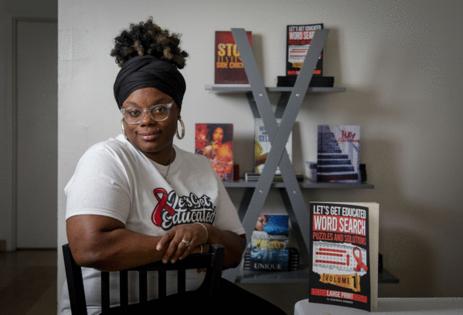 Less than two weeks earlier, the then 24-year-old’s partner was diagnosed with pneumocystis pneumonia, a condition that strikes those with a compromised immune system. Kennedy’s partner’s doctor contacted her at his request, she said, and told her she should get tested for HIV. She immediately did.

“When I walked into the room and saw my midwife, doctor and a counselor, I already knew I had it,” she recalled. She was asked if she had any concerns after being told she was HIV positive.

“So you’re telling me I can’t have any more children?” Kennedy remembered blurting out. “The doctor told me it was the first time someone asked that question after hearing they were HIV positive.”

Kennedy has since had two more children and a grandson, all of whom are HIV negative thanks to adhering to prenatal preventative treatment during her last three pregnancies, she said.

“All that mattered was I had to protect the baby I was carrying,” she said. “I didn’t have time to worry about myself.”

Her viral load was very low when she gave birth to her last three children, so she was able to have vaginal births, she said. Transmission rates from mother to child are relatively low at 1%, if the mother takes medical precautions.

The mother of four, who hid her HIV status for 14 years because of the stigma attached to it, is using her story to help raise awareness of HIV. She is an author and an advocate for those who struggle with HIV or abuse.

The West Side native who now lives in Chicago's Roseland neighborhood said she spent more than a decade studying scriptures from her childhood to gain the courage to break her silence. Concerned with how her children might feel, she let them know her plans.

“One of my daughters said if disclosing your status helps someone, we are for you telling people,” she recalled. The morning of World Aids Day 2018, Kennedy posted on Youtube she was HIV positive.

Remember when a COVID-19 diagnostic test meant waiting in your car for a nurse wearing head-to-toe PPE to shove a long swab down your throat and send the sample to a lab that would take a week or more to return results?

But there’s a lot more at stake for Californians’ health care than mask and vaccine mandates.