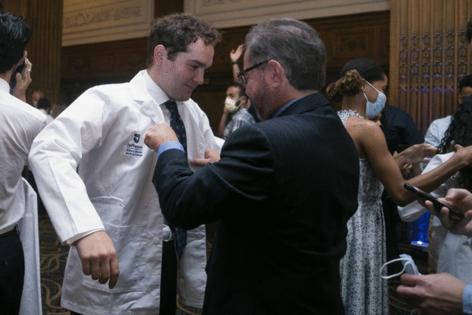 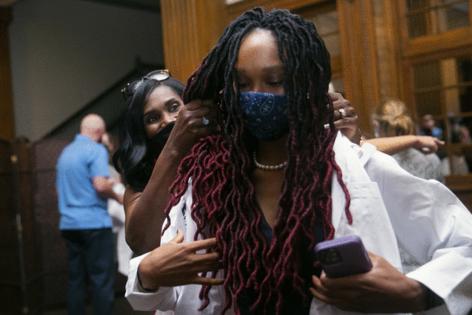 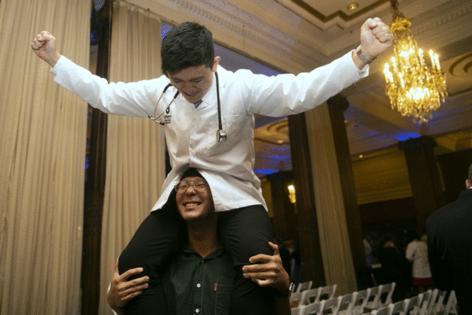 PHILADELPHIA — Nicola Habash's mother held out the short white coat for him.

"Here you go, young man. This is it," she said as he slipped his arms through the sleeves.

With that, Habash was among 280 Thomas Jefferson University students who began their medical school journey Friday during a two-hour ceremony at the Crystal Tea Room of The Wanamaker Office Building in Philadelphia.

This newest class of doctors-to-be comes to medicine having lived through a hundred-year pandemic, having known people who died or suffered, and having learned how a disease can upend the world.

"It's going to be interesting to see this group of students," said Mark Tykocinski, Jefferson's provost and executive vice president for academic affairs. "How it will change them? I have no idea. I'd like to think it makes people more flexible. The future isn't entirely predictable. You often have to go with the flow and adapt, and certainly, that's a critical quality for a physician."

The growing threat of the delta variant may be the next test of that flexibility.

Habash, a University of Delaware graduate from Wilmington, experienced COVID-19 firsthand. It kept him in bed for a few days and fatigued for weeks after, he said. Now, he's vaccinated. But his grandmother can't be vaccinated because of a health condition, so he also saw firsthand how health disparities affect patients.

Every year, new medical students and their families gather for speeches that culminate in the signature coat ceremony and the reading of the Hippocratic oath. This year, for the second time, each student also received a Narcan kit, which helps to reverse opioid overdoses, a symbol of the epidemic still gripping the city — and of the responsibilities they are assuming.

They will begin classes Monday. Lily Steele-Dadzie, 23, of Cherry Hill, who got her undergraduate degree at Johns Hopkins, can't wait.

"I'm excited, a bit overwhelmed, knowing that I will be following in the path of giants," she said after hearing speeches about eminent doctors. "I'm going to have to work hard to make my mark, and I do want to make a mark."

Steele-Dadzie said working in a doctor's office the last year showed her, perhaps better than anything, the human side of medicine in the face of such a dehumanizing disease.

"I'm glad that's something I learned in person," she said.

Cristian DeSimone, 22, of Phoenixville, said he's excited to start but also said the pandemic was daunting.

"We don't know everything," he said. "We never will know everything. We always have to learn and keep finding more information out, but that's also one of the coolest parts of medicine."

His father, Salvatore, an ophthalmologist, helped him into his white coat.

"He's the reason I'm doing this," DeSimone said of his father.

His brother, Joey, who started medical school at Jefferson last year, also came to the ceremony. Both got their undergraduate degrees at Wake Forest University and now will go through medical school together.

Gregory Whitehorn, 23, a University of Pennsylvania graduate from Philadelphia, was helped into his white coat by his mother, Terri Brown-Whitehorn, a pediatric allergist. He said he's committed to helping address health inequities that became more pronounced during the pandemic, as the coronavirus disproportionately impacted people of color.

"I just want people to know that I hear them," he said. "They are not alone."

Amiti Jain, 21, a Pennsylvania State University graduate from Northern Virginia, said the pandemic put a spotlight on both the limits and promise of medicine.

"A lot of times patients look to their doctors for answers," she said. "What I've learned today and the year past, medicine isn't the answers. Medicine is a continual seeking of answers."

It's hard for the public to understand health care policy, she said. She cited the confusion around mask-wearing and shifting guidelines. She wants to address communication gaps that lead to those misunderstandings, she said.

"If we bridge the communication gap, we're going to be able to bridge and overcome the differences we have," she said.

Jain was motivated to go into medicine after seeing babies undergo operations at a children's hospital when she was in high school.

"I wanted to help those tiny babies," she said.

Jocelyn Watts, 31, a Temple University graduate from South Philadelphia, worked as a drug and alcohol counselor in the city and was inspired by the doctors trying to help patients overcome addiction.

"I want to be someone who is a pillar of the city, a doctor who is here to help," she said.

Watts was among 2.8% of 11,678 applicants accepted to Jefferson's Sidney Kimmel Medical College this year.

They're an eclectic group, a cross section of humanity, and their diversity will help them connect with patients, Tykocinski said. He read off the class profile during the ceremony. There's a cowboy, a drone pilot, a stand-up comic, a professional roofer and a television production assistant. There are musicians, dancers and athletes including a cricket player from rural India.

One student sang for the pope, another at the Vatican. Some overcame serious diseases or saw a family member do so. One spent a gap year in Senegal. There's the grandson of a Nobel laureate, a baking blogger, and a costume entertainer.

One, Tykocinski said, is a triplet.

That's Habash, who learned as a child the human impact a doctor can have on a young boy. He was inspired to become a doctor by his pediatrician, he said.

"My family is Palestinian American," Habash said. "I've always grown up on the margin of the Arabic culture but wanting to fit in with the American culture. ... Growing up, the one thing that was consistent in my life was going to the same doctor's office. I always felt I was heard and taken care of.

"Down the road, if I'm able to give a child who does not have a stable household 15 or 20 minutes of care and compassion, I can make a very large difference in their life."