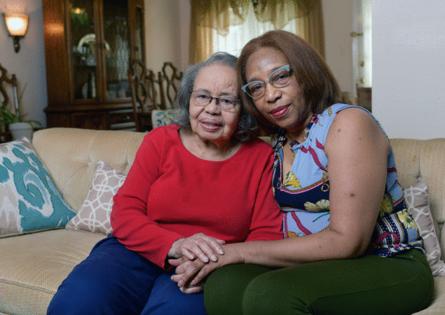 PITTSBURGH — Diane Powell understands what it’s like to watch a friend slip away.

Tina, a close friend whose last name she did not reveal, died from Alzheimer’s disease in her early 70s, just two years after its onset. Powell says her decline was rapid, radical and disturbing. By the time the progressive brain disease fully took hold, a woman renowned for her cooking skills could barely remember how to make a pot of coffee.

“We could see the fear in her own eyes that she realized at certain points that her conversation was disjointed and no longer made sense,” Powell said. “She went from being a very vivacious, educated, professional woman who was very talkative and connected with the community to becoming very, very quiet and going into a shell.”

Powell, of Mt. Lebanon, Pennsylvania, is chair of the Pittsburgh chapter of Black Women for Positive Change, which advocates for education, affordable health care and anti-violence in the Black community. This was her first experience with Alzheimer's disease.

Multiple studies have revealed widening disparities between Black Americans and white Americans in the prevalence and treatment of Alzheimer's at a time when more people are at risk. According to the Census Bureau, 16.5% of the U.S. population is 65 years or older, the age when symptoms of Alzheimer’s typically begin to appear. By mid-century, that demographic is expected to reach 22%.

That’s why Powell and the Alzheimer’s Association have decided to team up for a campaign to connect local Black residents with the tools to seek treatment and support for the disease — before it’s too late.

A 2018 study conducted by the Chicago Health and Aging Project suggested that Black Americans are nearly twice as likely to develop Alzheimer’s compared with white Americans, and that the disease is underreported within the Black community. In an 18-year study of 10,802 individuals age 65 and older, Black participants were found to have a 1.9 times higher risk of developing Alzheimer’s.

The study, in which 64% of the participants were Black and 36% white, looked at cognitive function decline and both prevalent and developing dementias. After an initial clinical evaluation, it was determined that 19.9% of Black participants had a weighted prevalence of Alzheimer’s compared to 8.2% of white participants.

According to the study, educational attainment plays a role. The study mentions racial disparities in educational achievement in the United States as a contributing factor, with socioeconomic circumstances such as poverty and poor-quality schools widening the gap between Black and white Americans.

CHARLOTTE, N.C. -- A truck claiming to be from a funeral home was emblazoned with a blunt message Sunday while driving around Bank of America Stadium, where the Charlotte Panthers were playing the New Orleans Saints: “...Read More

Desperation led José Luis Hernández to ride atop a speeding train through northern Mexico with hopes of reaching the United States 13 years ago. But he didn’t make it. Slipping off a step above a train coupling, he ...Read More

Having a back injury can put a person's life on hold. While most people can find relief through nonsurgical methods like physical therapy, steroid injections and medication management, some patients, including those with ...Read More