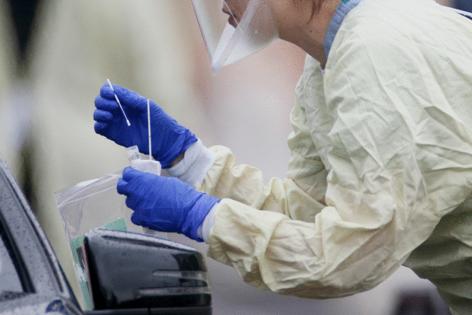 In 50 living rooms and home offices, Delaware contact tracers arm themselves every morning with laptops and cellphones, the weapons they need to curb coronavirus outbreaks. They spend hours each day calling people who have recently tested positive for the virus. They dial each person in the morning, afternoon, and evening until they answer, listening to ring after ring, hoping to hear a voice on the other end of the line. Eventually, they’ll reach about 80% of cases with a valid phone number.

Now, more than at any other point in the pandemic, this team says it can help stop surges and — with vaccinations — keep case rates low, said Tracey Johnson, director of Delaware’s Office of Contact Tracing. The state, with a population just under a million, has been averaging 45 new cases a day.

“This is the crux of public health,” Johnson said. “Right here. This moment.”

Contact tracing generally involves calling people who test positive for the coronavirus, identifying anyone they might have exposed, and then reaching out to those individuals to alert them and tell them to quarantine or monitor for symptoms, regardless of whether they’re Olympic gymnasts in Tokyo or professional baseball players. As the virus spread rapidly in 2020, it was impossible for health departments to trace all cases. But now as rates have dropped in the Philadelphia region, contact tracing is once again a powerful tool, and tiny Delaware has wielded it particularly well, reaching a higher percentage of people recently than neighboring Pennsylvania and New Jersey.

In Delaware, 81% of residents reached by contact tracers completed a case investigation interview between June 27 and July 18, the most recent period for which the data were available.

This comes months after the height of the pandemic, when states were reporting thousands of new cases a day and many health departments were tracing only the most vulnerable cases.

In Philadelphia, which has 600,000 more residents than Delaware, the contact tracing program was “cut back significantly” for five months this winter, as case counts skyrocketed and some tracers were reassigned to vaccination clinics, spokesperson James Garrow said. Efforts ramped back up to full capacity in May, he said, and in recent weeks tracers have completed investigations with 40% to 67% of confirmed cases.

“We continue to urge people to answer the call if they are contacted,” said Pennsylvania Department of Health spokesperson Maggi Barton. “Swift and effective contact tracing plays a central role in stopping potential outbreaks before they begin.”

Long a crucial tool in public health for curbing the spread of infectious diseases like measles, HIV, and tuberculosis, contact tracing joined the common vernacular when the coronavirus pandemic hit last year. Since then, it’s been utilized across the country and the world to combat the virus.

With the delta variant threatening, and already causing surges in undervaccinated areas of the country, officials across the Philadelphia region say comprehensive contact tracing is essential.

“Contact tracing is most effective when case counts are low,” said Nancy Kearney, communications manager for the New Jersey Department of Health. “As people begin to resume pre-pandemic activities, it is important to alert someone they may have been exposed, so they can begin quarantine and limit the spread of disease.”

But there are hurdles. Since May, Philadelphia’s 160 contact tracers “have seen less participation and more refusals compared to last year,” Garrow said.

Even if someone consents to an interview, they don’t always want to provide the names of close contacts. And if they do, those contacts don’t always answer calls either.

New Jersey’s 1,727 contact tracers — a number that has, like case counts, been decreasing since March when there were more than 3,000 tracers — found that 34% of residents interviewed provided the names of contacts they may have exposed, according to state data. Most of those contacts were able to be notified, the data show.

Of those interviewed in Delaware in recent weeks, 67% named at least one person they possibly exposed to the virus, according to state data, and contact tracers were able to reach more than half of all named contacts.

Pennsylvania, which has 140 case investigators who interview confirmed cases and 308 contact tracers who reach out to their contacts, does not release comprehensive data on its contact tracing. But, according to its latest monthly report, 254 of 701 named contacts, or 36%, were successfully reached between June 10 and July 9.

‘Next piece of this puzzle’

Delaware is among the states that have used contact tracing to help them determine other important metrics, too, such as the percentage of breakthrough cases, or cases among people who have been vaccinated.

After contact tracers added questions about vaccination status to their interviews this spring, in line with CDC guidance, officials there were able to determine that less than 1% of vaccinated Delawareans had tested positive for the virus.

Johnson’s team — which has 50 active contact tracers and 50 reserves (compared with 350 at the pandemic’s peak) — has been able to meet that need through constant communication and reevaluation, said Johnson, a Lancaster native who previously managed contact tracing for Penn Medicine Lancaster General Health.

The program began in May 2020 when the state partnered with NORC at the University of Chicago, a research institution that also works on Maryland’s contact tracing efforts. Gov. James Carney said at the time that the program would cost “a lot” but be paid for with federal pandemic relief funds.

Each week, the Delaware squad discusses issues it is facing on phone calls, any new CDC guidance it is incorporating, and whether questions should be added or amended to interview scripts to gain information that would be most helpful to the state’s virus response.

“This is a pandemic and this is our way of making a difference in this,” Johnson said. “This is what we can do to make it better.”

Miché Aaron has always been a high achiever. The 29-year-old is in her third year of a planetary sciences doctoral program at Johns Hopkins University, where she researches minerals found on Mars. She’s a former NASA ...Read More

If the Summer Olympics inspire you to start working out, Mayo Clinic health experts say it's important to stay hydrated when you exercise. And a valuable term to remember is "drink to thirst."

"You can become dehydrated ...Read More

Life expectancy declined 1.5 years in the United States in 2020 and by twice that much for Black and Hispanic people, largely due to the surge in deaths from COVID-19, federal health officials said Wednesday.

Whether you’re looking for a little more calm or a peaceful night’s sleep, you might reach for plant-based therapies to help you relax. Many plants have traditional uses as tinctures and teas for promoting calm and ...Read More

As the temperatures warm and summer is quickly approaching, it’s time for meals eaten outdoors while enjoying the sunshine. Most of us love the traditional foods of summer: burgers and dogs, creamy salads, yummy desserts...Read More

DEAR MAYO CLINIC: My daughter is 14 and her pediatrician recently reminded us that she should get the HPV vaccine because it can help prevent cervical cancer. That got me thinking about gynecologic health for my daughter. ...Read More