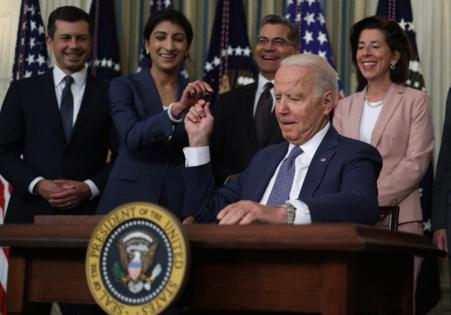 President Joe Biden’s executive order of July 9 included various steps toward making good on campaign promises to take on pharmaceutical companies by allowing the importation of prescription drugs and curbing the high cost of medicines.

These issues were key to candidate Biden’s 2020 health care platform, which stated he would “stand up to abuse of power” by drugmakers. Biden promised on his campaign website that he would allow consumers to buy prescription drugs from other countries, as long as the Department of Health and Human Services deemed it safe. In speeches, candidate Biden also pledged to bring down drug costs by 60%.

Nearly six months into his term, Biden issued an executive order on promoting economic competition, which included moves toward fulfilling these promises.

KHN has teamed up with our partners at PolitiFact to analyze Biden’s promises during the 2020 presidential campaign — and, so far, experts generally say the jury is still out on how meaningful these efforts will be.

Promise: “To create more competition for U.S. drug corporations, Biden will allow consumers to import prescription drugs from other countries, as long as the U.S. Department of Health and Human Services has certified that those drugs are safe.”

The July 9 executive order directed the Food and Drug Administration commissioner to work with states to develop a program allowing prescription medications to be brought in from other countries, particularly Canada.

However, several drug pricing experts told us that, of all the policy ideas aimed at reducing the cost of drugs, importation seems the least likely to happen.

“Other countries are not interested in facilitating this,” said Benedic Ippolito, a senior fellow in economic policy studies at the American Enterprise Institute.

Matthew Fiedler, a fellow with the USC-Brookings Schaeffer Initiative for Health Policy, agreed.

A respiratory infection prevalent mostly in the winter has been increasing in parts of the U.S.

"Particularly in the South part of the U.S., we have seen an increase in what's called RSV, or respiratory syncytial virus. ...Read More

Exactly what American health care will look like if Democrats can pass their $3.5 trillion spending plan is unclear, but the senator negotiating its health-related provisions hopes what emerges will be dramatic: the first ...Read More

It's normal to feel nervous in some social situations. For example, going on a date or giving a presentation may cause that feeling of butterflies in your stomach. But in social anxiety disorder, also called social phobia,...Read More

We’re living longer, but not necessarily better. As the population over 65 in the United States is projected to double by 2060 — with one in five residents in retirement age — so will the number of Americans needing ...Read More

Q: What kind of insect repellent should I buy for my children?

A: Warm weather means more kids are getting outside to play, hike and enjoy the fresh air with family and friends.