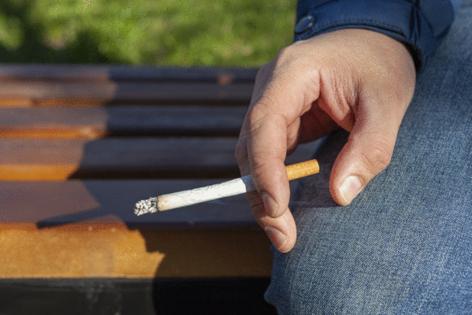 KANSAS CITY, Mo. — Valerie Howard thought smokers in Missouri had a big incentive to quit this past year: the fear of dying from COVID-19.

"But I think in some cases the converse happened," said Howard, Tobacco Control Program manager for the Missouri Department of Health and Senior Services.

"There are folks that used it as an opportunity for sure but we also saw an increase as a result of just the stress from the pandemic itself."

In Missouri, health officials tried to get ahead of the pandemic with a statewide stop smoking campaign on social media that included this message: This is not the best time to start smoking again.

It focused on the risks of relapse, encouraged smokers of all ilk to think about how their health affects loved ones, even pets, and directed them to 1-800-QUIT-NOW, free, phone-based tobacco cessation services available to residents of every state.

But the calls didn't come as health officials across the country hoped.

Calls to tobacco "quitlines" in the United States dropped 27% from 2019 to the first quarter of 2020, then sank 39% from April to June, the North American Quitline Consortium has reported.

Calls to 1-800-QUIT-NOW (800-784-8669) are directed to individual states, and health department officials in both Missouri and Kansas report their quitline calls dropped off last year. It's too early to see what those numbers will be like for 2021.

Anything that suggests people are smoking more or have stopped trying to quit, is particularly bad news for Missouri, which has some of the highest lung cancer rates in the country and the 10th highest adult smoking rate in the United States.

After being laid off from her job as a systems analyst for a specialty chemicals company in December, Gabriela de Pompignan opted to hang on to her former employer’s insurance coverage under the federal law known as ...Read More

PHILADELPHIA — Nicola Habash's mother held out the short white coat for him.

"Here you go, young man. This is it," she said as he slipped his arms through the sleeves.

With that, Habash was among 280 Thomas Jefferson ...Read More

Many people are familiar with the term “probiotics” but may not actually know what they are. Probiotics are live microorganisms that exert health benefits on the host (the human) when they are ingested. These compounds...Read More