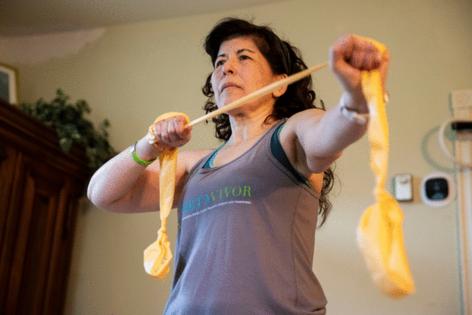 The cancer was caught early enough that it had not spread to other parts of her body, but doctors said she would need a mastectomy to remove the breast and the cancer in it.

The implant she received after the surgery built up scar tissue, became painful, and eventually needed to be removed.

This time, in 2020, Sarcich opted for a newer kind of surgery, in which tissue from her left thigh was transplanted to her chest to form a breast.

She was finally starting to feel — and look — like herself again.

“After the mastectomy, I couldn’t look at my chest for months, I tried to avoid mirrors. It took me so long to understand this was me,” said Sarcich, 55, of Wilmington, Del.

Her relief was short-lived. The reconstruction surgery had been covered by her health insurance, but she soon found out that a follow-up procedure to thin her right thigh to match the left, was not.

Having same-size legs was deemed cosmetic, not medically necessary.

Federal and state laws require that health insurance cover breast reconstruction following a mastectomy, as well as any follow-up procedures to restore symmetry between the breasts. But patients often struggle to get insurance coverage for surgery to restore the appearance of other parts of their bodies when tissue was harvested for reconstruction.