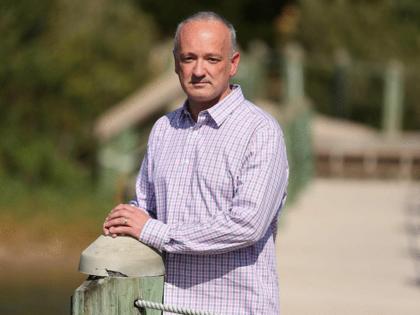 ORLANDO, Fla. – On Halloween night 2020, Dr. Anthony Tucker woke up in a Palm Coast intensive care unit with the blurry figures of his wife and two teenage sons across the room. They wore what looked like spacesuits.

“Am I hallucinating?” he wondered, trying to piece together the few facts he could recall of the preceding days.

He blinked and stared. One of his sons began to cry.

“And then it struck me that they were actually there, that the hospital had wrapped them up in these hazmat suits and brought them in to say goodbye.”

Tucker, a 46-year-old ear, nose and throat specialist — a man whose only previous health problem was mild acid reflux — was losing his battle with COVID-19.

The virus had attacked his lungs, filling them with fluid and pus, and forced his heart to work to the brink of failure.

After seeing his family, Tucker would have no memories of the following two weeks. The next thing he knew, he was waking up in another ICU bed, this one in Orlando.

“We don’t know why some people make it and some people don’t,” said Dr. Gilles Chemtob, the critical care director at AdventHealth Palm Coast and Tucker’s main physician for those first two weeks. “I know he had an incredible spirit to fight. But he got everything he could throw at him, and he was still deteriorating rapidly.”

‘He never gets sick’

It began with what he thought was a bad cold. The kids had had it. Then his wife. But when he couldn’t make his oldest son’s Friday night football game, Kristin Tucker knew something more serious was wrong with her husband.