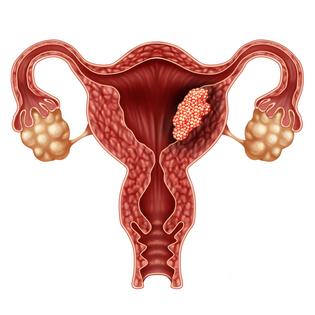 DEAR MAYO CLINIC: My 54-year-old sister was diagnosed recently with early-stage endometrial cancer. She only went to the doctor because she had bleeding between menstrual cycles. I’m wondering if I am at risk also and if there is anything I can do to reduce my risk. Is there a screening test?

ANSWER: An increased risk for endometrial cancer can run in families in some cases, but it’s rare. More commonly, this kind of cancer is linked to risk factors such as obesity, age and having other underlying medical conditions. At this time, no screening test is available for endometrial cancer. Researchers are, however, studying a test that could help detect this type of cancer in its earliest stages.

As in your sister’s case, endometrial cancer often is found when it’s still at an early stage. That’s because the most common symptom, abnormal vaginal bleeding, usually prompts a woman to see her doctor. If endometrial cancer is discovered early, surgically removing the uterus typically offers a cure.

Endometrial cancer on its own is not a disease you inherit. However, a genetic disorder known as Lynch syndrome that is passed down through families has been shown to increase the risk of developing endometrial cancer, as well as other cancers of the colon, stomach, kidney, small intestine, liver and sweat glands. If your family has a strong history of these types of cancers, I would encourage you to talk with your health care provider about your risk and see if genetic testing might be appropriate.

In most cases, though, factors other than family history play a larger role in raising a person’s risk for endometrial cancer. Some of the most significant include medical conditions that change the balance of the hormones estrogen and progesterone in your body. Examples of such conditions include obesity, polycystic ovary syndrome and diabetes. Fluctuations in the balance of these hormones cause changes in the endometrium. Having high blood pressure or high cholesterol can raise your risk for endometrial cancer, too.

But a clinical trial is underway at Mayo Clinic that’s studying the effectiveness of collecting and examining samples of uterine fluid via a tampon for diagnosing endometrial cancer. The study currently has more than 1,900 participants. The results are showing promise and a larger clinical trial is under development. Ultimately there may be a new, less invasive way to identify this cancer quickly.

If you are worried about endometrial cancer or if you notice any abnormal vaginal bleeding — such as bleeding after menopause, bleeding between periods or unusual blood-tinged discharge — make an appointment to see your doctor to have it evaluated. In most cases, when endometrial cancer is caught early, it is a highly treatable disease. —Jamie Bakkum-Gamez, M.D., Gynecologic Surgery, Mayo Clinic, Rochester, Minnesota