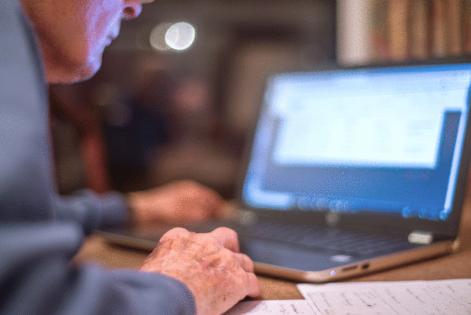 After Maria Turner’s minivan was totaled in an accident a dozen years ago, she grew impatient waiting for the insurance company to process the claim. One night, she saw a red pickup truck on eBay for $20,000. She thought it was just what she needed. She clicked “buy it now” and went to bed. The next morning, she got an email about arranging delivery. Only then did she remember what she’d done.

Making such a big purchase with no forethought and then forgetting about it was completely out of character for Turner, then a critical care nurse in Greenville, S.C. Although she was able to back out of the deal without financial consequences, the experience scared her.

“I made a joke out of it, but it really disturbed me,” Turner said.

It didn’t stop her, though. She shopped impulsively online with her credit card, buying dozens of pairs of shoes, hospital scrubs and garden gnomes. When boxes arrived, she didn’t remember ordering them.

Six years passed before Turner, now 53, got a medical explanation for her spending binges, headaches and memory lapses: Doctors told her that imaging of her brain showed all the hallmarks of chronic traumatic encephalopathy. CTE is a degenerative brain disease that in Turner’s case may be linked to the many concussions she suffered as a competitive horseback rider in her youth. Her doctors now also see evidence of Alzheimer’s disease and frontotemporal dementia, which affects the frontal and temporal lobes of the brain. These may have roots in her CTE.

Turner’s money troubles aren’t unusual among people who are beginning to experience cognitive declines. Long before they receive a dementia diagnosis, many people start losing their ability to manage their finances and make sound decisions as their memory, organizational skills and self-control falter, studies show. As people fall behind on their bills or make unwise purchases and investments, their bank balances and credit rating may take a hit.

Mental health experts say the covid pandemic may have masked such early lapses during the past year. Many older people have remained isolated from loved ones who might be the first to notice unpaid bills or unopened bank notices.

“That financial decision-making safety net may have been weakened,” said Carole Roan Gresenz, interim dean at Georgetown University’s School of Nursing and Health Studies, who co-authored a study examining the effect of early-stage Alzheimer’s disease on household finances. “We haven’t been able to visit, and while technology can provide some help, it’s not the same … as sitting next to people and reviewing their checking account with them.”

Even during times that aren’t complicated by a global health crisis, families may miss the signs that someone is struggling with finances, experts say.

“It’s not uncommon at all for us to hear that one of the first signs that families become aware of is around a person’s financial dealings,” said Beth Kallmyer, vice president for care and support at the Alzheimer’s Association.