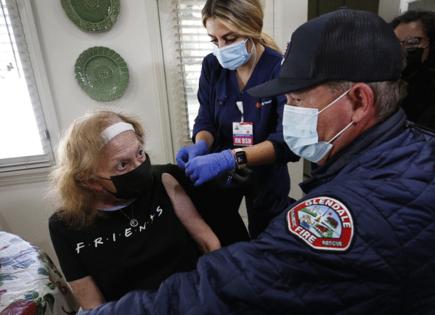 It was April, more than three months into the vaccination campaign against COVID-19, and Jim Freeman, 83, still had not gotten his first dose.

Freeman had been eligible for months as part of the 75-and-older target group deemed most vulnerable to death and serious illness in the pandemic. But he could not leave his home to make the journey to one of the mass-vaccination sites in San Mateo County. Freeman, who has Parkinson’s disease, has extremely limited mobility and no longer can walk.

“He watches TV at night and sees all these people in line getting vaccines, but he couldn’t do it,” said his daughter Beth Freeman, 58. “It was really frustrating.” She contacted the county and state public health departments and even her local congresswoman for help, but none had a solution.

Finally, after weeks of failed attempts to get someone to vaccinate her father at their home, Beth spent $700 to rent a special wheelchair-accessible van and, with the help of a home health aide, nervously drove her father to the county’s mass-vaccination site.

Even as the nation has moved on to vaccinating everyone 16 and older, the vast majority of homebound people have not yet been vaccinated, said Kelly Buckland, executive director of the National Council on Independent Living. “As far as I can tell, no one’s really doing it. Maybe a few places in the country, but not on the mass scale it needs to be.”

Across the nation, an estimated 4 million Americans are homebound by age, disability or frailty, unable to easily leave their homes to receive a COVID-19 vaccine.

Buckland noted that, while homebound people are not out in public where the virus is circulating, they don’t live in a bubble. Most rely for care on family members or a rotating staff of home health aides who come and go and often have their own homes and families. “For people with disabilities, you can’t close yourself off. You don’t have the option. People have to come into your home every day to give you services.”

The Biden administration in late March dedicated $100 million to help vulnerable older adults and people with disabilities get vaccinations. But many caregivers and homebound people say they aren’t yet feeling the impact of that effort.

California, where tens of thousands of residents like Jim Freeman are still waiting their turn for vaccination, offers a sharp lens on the challenges.

Marta Green, a California official helping oversee vaccine distribution, said during an April meeting of the state’s Community Vaccine Advisory Committee that California is “working on a partnership” to send ambulances to vaccinate homebound people where they live. In response to questions about how many homebound people had been vaccinated so far, a spokesperson for the California Department of Public Health said the effort was “just beginning” and estimates were not available.