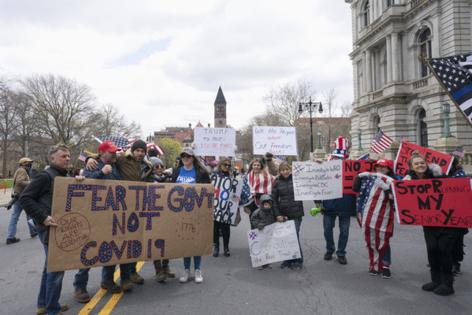 People who were heavy users of conservative or social media during the early months of the pandemic experienced increased belief in conspiracies surrounding COVID-19, a new study from researchers with the Annenberg Public Policy Center at the University of Pennsylvania found.

The study, published in the Journal of Medical Internet Research last week, built upon previous research in which 840 adults were surveyed about their views on three popular coronavirus conspiracy beliefs, their media habits, intention to get vaccinated and other COVID-19 precautions in March 2020 and again in July. Participants were asked to rank their levels of belief in the various conspiracy theories from "definitely false" to "definitely true."

In the new study, researchers found that a continued use of conservative media sources — which included Fox News, Breitbart and The Rush Limbaugh Show — resulted in increased COVID-19 conspiracy beliefs, which were associated with less mask-wearing and more vaccine hesitancy.

"The findings tell us that there are sources of information that people are using that are not helpful," said Dan Romer, research director at the Annenberg Public Policy Center and a co-author of the study. "There are news sources and information sources that are either helping or hurting the country's ability to get people vaccinated or wear a mask, in part because of what they learn about these conspiracies."

The study found that the percentage of users of conservative media who reported believing that the coronavirus was created by the Chinese government as a bioweapon increased from 52% in March to 66% in July. Similarly, 32% of respondents reported believing that some in the Centers for Disease Control and Prevention (CDC) "are exaggerating the danger posed by the coronavirus to damage the Trump presidency" in July, up from 24% in March.

Researchers also found that people using mainstream print media, such as the New York Times, Associated Press and the Washington Post, experienced decreased conspiracy beliefs, which was related to more mask-wearing and greater intentions to get vaccinated. But those who relied on mainstream television news like ABC and NBC did not report changes in their conspiracy beliefs, although they were more likely to get vaccinated and wear masks. This may be because seeing people wear masks and receive vaccines on television normalizes those behaviors, Romer said.

"It makes the behaviors more acceptable and normative without going into why people should or shouldn't do it," Romer said. "You could argue that [television stations] should be more proactive on that."

The study also found that mainstream media sources were less influential on decreasing conspiracy beliefs than conservative media and social media sources were on increasing those beliefs. Romer said it's hard to disprove conspiracies, making it much easier to promote them "because all you have to do is suggest they might be true."

"Mainstream print might have a good influence on this, but they're probably not spending a lot of time talking about [conspiracies]," he said. "They can't be verified, so they're not going to cover those stories. They're not going to be talking about them to the extent that conservative sources are, so there is an asymmetry going on. That's what makes them so difficult to deal with."

Romer said that the study points to a need for conservative media outlets to make more of an effort to report verifiable information about the pandemic, and for social media platforms to be faster and more aggressive with removing and blocking conspiracy beliefs that public health authorities have deemed problematic. Public health experts should also make more of an effort to reach audiences of conservative media and mainstream media could do a better job at explaining the science behind CDC recommendations, he said.

"If people understood the scientific basis for those recommendations, they might be less cynical when something changes," Romer said. "Part of the problem with conspiracies is that people don't trust the public health community. When you're told one thing and the next day their minds have changed, that breeds all kinds of fertile soil for conspiracy beliefs."

Need to add a little pep to your step? There are dozens of things that you could try -- some of which you might never have thought of. Consider these, which target each of your five senses.

Taste: magnesium. If your ...Read More

Experts say getting fully vaccinated is the most important step people can take to lower their risk of transmitting or getting infected with COVID-19. Even then, Dr. Stacey Rizza, a Mayo Clinic infectious diseases ...Read More

The cost of caring for America’s nearly 6 million Alzheimer’s disease patients is already $600 billion a year, factoring in the cost of uncompensated caregiving. Now, the Food and Drug Administration has approved a ...Read More

Are you over 40 and suddenly feel like your straining to read things right in front of your face? Eye experts at Mayo Clinic say it's actually a normal — and sometimes annoying — condition of the eye that is a part of...Read More

The World Blood Donor Day campaign, observed Monday, June 14, is an effort by the World Health Organization intended to recognize the critical contribution of blood donors and raise global awareness about the need for safe...Read More