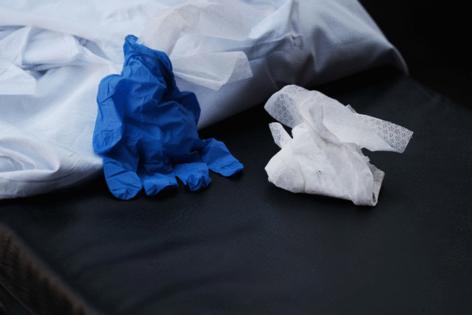 Without meaningful changes, climate change will soon become a public health emergency with the potential to disrupt billions of lives. Climate-influenced disasters such as wildfires and hurricanes are already damaging ecosystems and harming Americans. Leaders within each area of the economy must examine their industry’s role in climate change, and health care is no exception.

The American health care sector is responsible for approximately 8-10% of the country’s total greenhouse gas (GHG) emissions; if our health care sector were its own country, it would be the 13th largest source of GHG emissions worldwide. So while we’re helping to mitigate the current COVID-19 pandemic, we’re contributing to a different crisis altogether.

A primary, and understudied, inefficiency within the health care sector is the physical waste produced in hospitals and health centers. Data on how much waste is produced per patient is limited, though one study from 2010 estimated that each staffed bed in a hospital results in 33.8 pounds of waste per day, ranging from gloves and gowns to surgical supplies and medicine containers. Each cataract surgery in Western countries is estimated to generate the same amount of greenhouse gas emissions as driving a car 310 miles.

Our own research indicates that in the United States, almost all of this waste is either incinerated or ends up in landfills, where it will remain for decades. Indeed, even recycling is not necessarily environmentally sustainable, as it is estimated that only 9% of recyclable materials are actually recycled. And, given the continued discourse in this country surrounding race, we must note that hazardous waste facilities are disproportionately likely to be located near predominantly minority communities, harming residents’ health.

Climate change skeptics may be unpersuaded by the environmental argument to decrease medical waste, but perhaps they would be swayed by the economic implications of waste. Each year hospitals in the United States dispose of 2 million pounds of supplies that were never even used, at a cost of $15 million annually. One study found that $968 worth of unused single-use surgical supplies were discarded per neurosurgery procedure.

The SARS-COVID-19 pandemic has even more starkly highlighted the need for increased efficiency in the production and disposal of medical waste. Early in the pandemic, suppliers were not making enough face masks and personal protective equipment (PPE) for health care workers, leading to dire shortages.

Now that the supply of PPE has stabilized, a new problem has arisen — what to do with contaminated sanitary equipment. Had PPE been able to be sanitized and reused, instead of being discarded after one use, shortages might not have occurred; and hospital leaders might not have to worry about disposal. And now, with the advent of vaccines for COVID-19, millions of syringes and vials will need to be disposed of after use.

Unfortunately, governmental inaction and stakeholders’ interest in maintaining the status quo have prevented meaningful changes in the production and disposal of medical waste. American drug companies willfully continue to produce single-use drug vials, such as eye drop bottles and cancer drugs. These vials must then be disposed after one use, often along with excess medicine, despite there being no credible evidence that single-use vials are medically safer than their reusable counterparts.

We have found from examining hospitals noted for their efficiency that by switching to reusable materials, hospitals could produce significantly less medical waste per patient without any effect on complication rates or patient outcomes. Single institution pilot projects aimed at decreasing procedural waste have been carried out in fields ranging from plastic surgery to gynecology, but these studies must be expanded to feature greater institutional participation and acceptance.

There are other opportunities to improve efficiency as well. A hospital in Rwanda has created a natural ventilation system that precludes the necessity of burning fossil fuels to ventilate operating rooms, and a hospital in Haiti runs on solar power. We would be wise to follow the innovative examples set by such hospitals.

Health care workers have rightfully been hailed as heroes during the COVID-19 pandemic. Their leaders’ long-term decisions — and the public’s ability to hold these leaders accountable — will determine whether, in the coming years and decades, the health care industry continues to be seen in such a positive light.

Sathvik Namburar (sathvik.r.namburar.med@dartmouth.edu) is a graduate of Johns Hopkins and current medical student at Dartmouth. Dr. Alan Robin is an Emeritus Associate Professor of Ophthalmology at Johns Hopkins. They wrote this for the Baltimore Sun.