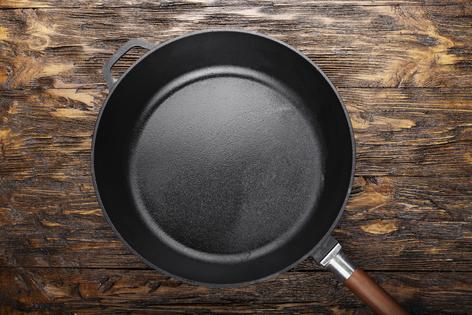 A cast-iron skillet may seem like an old-fashioned cookware choice. But this dependable object is a must in the modern kitchen. Cast iron conducts heat beautifully, seamlessly transitions from stovetop to oven, and lasts for decades. Plus, cooking with cast iron can be good for your health, so it’s worth looking into other cast-iron tools like Dutch ovens and cute baking molds too.

Read on to learn how to clean, season and use a cast-iron skillet—plus some health reasons to do so.

How to clean a cast-iron skillet

When you clean your skillet, never use dish soap because it can strip the pan’s seasoning (ditto a cycle in the dishwasher or using a steel-wool scrubber). Instead, scrub your cast iron with a stiff brush and hot water, then wipe dry with a towel or set the pan over medium-low heat until it’s completely dry.

How to season a cast-iron skillet

A cast-iron pan has a thin layer of seasoning which is vegetable oil or flaxseed oil that’s bonded to the metal to create a slick cooking surface. It can last a while, so you don’t have to re-season it every time you cook, but when you cook with acidic foods, they can break down that layer. A well-seasoned cast-iron pan is virtually nonstick, so it’s worth taking the time to season it (or re-season your pan if it was pre-seasoned) correctly. Whether you have a new skillet or an old one you want to rehab, the method is the same:

Your skillet is now seasoned!

What to cook in a cast-iron skillet

Now that you have a beautifully seasoned skillet, it’s time to get cooking. The joy of cast iron is its ability to get hot and stay hot. Here are a few ideas:

Additionally, a cast-iron pan is oven-safe, so you can use it for recipes that start on the stove and end in the oven.

Can I use cast iron on a glass- or ceramic-top stove?

Have a flat-top stove? Although some manufacturers warn that cast iron can damage the top of the stove, just avoid dragging the pan across the surface.

How to store a cast-iron skillet

Storing your pans doesn’t require any special solution. Julia Child chose to store hers on a pegboard wall. Because the pans are attractive and hardy, storing them on top of your stove is a popular option. The drawer below your stove is a fine spot or even in the oven (just don’t preheat it while the pan is inside).

(EatingWell is a magazine and website devoted to healthy eating as a way of life. Online at www.eatingwell.com.)

Mayo Clinic researchers recently published a study that shows the proper use of masks reduces the spread of respiratory droplets. The findings strongly support the protective value and effectiveness of widespread mask use ...Read More

Looking back, she said she didn’t notice any health concerns that would indicate she had it. Her daughter Yolanda Williams,...Read More

After being laid off from her job as a systems analyst for a specialty chemicals company in December, Gabriela de Pompignan opted to hang on to her former employer’s insurance coverage under the federal law known as ...Read More