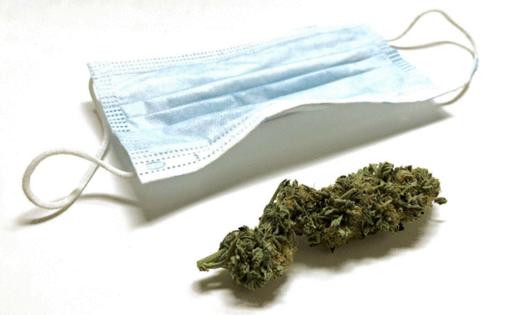 The authors stated that “the better results could be due to the medicinal properties, including anti-inflammatory effects, of some cannabinoids.”

A new study found that “cannabis consumption is associated with lower COVID-19 severity among hospitalized patients.”

According to the researchers “cannabis may actually lead to reduced disease severity and better outcomes despite a five-fold greater concomitant use of tobacco amongst cannabis users compared to non-users in our study population.”

Researchers aimed to assess whether cannabis users hospitalized for COVID-19 had improved outcomes compared to non-users.

The study published in the Journal of Cannabis Research showed that cannabis users had better outcomes, including a decreased need for ICU admission or mechanical ventilation.

“Cannabis users had significantly better outcomes compared to non-users as reflected in lower NIH scores (5.1 vs 6.0), shorter hospitalization (4 days vs 6 days), lower ICU admission rates (12% vs 31%), and less need for mechanical ventilation (6% vs 17%),” the study continued. “ICU admission was 12 percentage points lower and intubation rates were 6 percentage points lower in cannabis users.” About The Study The authors stated that “the better results could be due to the medicinal properties, including anti-inflammatory effects, of some cannabinoids.”

The researchers noted that the link between cannabis usage and better COVID outcomes makes sense.

“Out of the 1,831 COVID patients in the study, 69 patients reported active cannabis use, which was just 4% of the total patients,” the study, conducted at two California hospitals, stated. “It is important to point out that differences in overall survival were not statistically significant between cannabis users and non-users.” Methods The method used a retrospective analysis of patient data, which included comparing NIH COVID-19 Severity Scores, the need for supplemental oxygen, intensive care unit admission, mechanical ventilation, length of hospitalization, and in-hospital death for cannabis users and non-users.

“Given the diverse ways in which cannabis can be introduced into the body, our grouping of inhaled and ingested cannabis should introduce little variability to an already highly variable cohort of cannabis users,” the study explained about methods of consumption.

“Pooling all cannabis users, regardless of administration method, gives our study more power in analysis while minimizing the risk of overfitted data.” Conclusions The study concluded that “cannabis users were more likely to have lower levels of inflammatory markers at admission compared to non-users. This effect was sustained during their hospital course, with cannabis users continuing to have lower inflammatory markers compared to non-users.”

In addition, researchers said, “this is the first study looking at clinical outcomes of cannabis users hospitalized with COVID-19.”

However, the authors concluded that “further studies, including prospective analyses, will help to better understand the relationship between cannabis and COVID-19 outcomes.”